The ÜberSoldaten, or Robotersoldaten are human-sized military robots used by the Nazis in Wolfenstein II: The New Colossus and Wolfenstein: Youngblood.

A substitute for the Guard Robot in garrisons within the American Territories, these mechanical soldiers are built to imitate human proportions, in stark contrast to the hulking military robots seen in contemporary Europe. With a skeletal head and a powerful chassis frame, the ÜberSoldat's main advantage is its incredible speed and high agility, allowing it to sprint and jump great distances and even stick to walls. Its offensive weapons are two powerful energy weapons attached to its arms, which it uses to fire rapid volleys of blasts at potential foes. Their design sacrifices heavy armour to achieve their mobility, rendering them much more vulnerable to small arms than larger robots.

B.J. can encounter card-board ÜberSoldat's on the Eva's Hammer in the Killhouse. B.J. encounters them in Area 52 after unlocking the rocket train, with two jumping on the glass and going into their position or attacking him if he alerted the area. Afterward, they appear through the game, often stationed or ready to attack B.J. Blazkowicz. They start to appear less for favor of the Laserhund, but still make appearances.

In Youngblood, Übersoldaten units, now referred to as Robotersoldaten (Robot soldiers), can be encountered by Jess and Sophia in Neu-Paris, this time sporting black and red paint jobs. They possess above average health and below average soft barrier.

A much tougher variant known as Wurmlochsoldaten (Wormhole soldiers) appears during the Treasure Hunt sidequest; this robot soldier variant possesses a black-and-orange paint scheme, has a teleportation ability similar to that used by General Lothar Brandt in the first phase of his boss fight, and has durability on par with or even greater than that of a Super Soldier.

A unique all-red variant of the Robotersoldat, the Robotermörder (Murder robot), is the target of the sidequest of the same name. It is a unique robot commissioned by General Brandt in 1975 to roam the streets of New Paris and hunt down alleged terrorists. Although described as "the future of law enforcement" by Nazi propaganda, in function it is a State-sanctioned serial killer terrorizing the civilian populace. It is extremely durable, able to survive even more raw damage than a Zerstörer or Zitadelle, and packs more firepower than a standard Robotersoldat.

The ÜberSoldat is an extremely agile enemy which can be deadly at any range if not disposed of quickly. firing bursts of energy and throwing Handgranaten with the diesel upgrade that explode on impact. They most almost constantly, taking advantage of walls and platforms to stay out of the reach of the player. They may also perform an extremely fast horizontal dash which breaks the player's aim on them if hit by a non-fatal shot.

A simple strategy is to saturate them with fire from automatic weapons - the Schockhammer X or the Sturmgewehr upgraded with armor-piercing rounds are the best choices for the job. The LaserKraftWerk can also be devastating if the shot hits the mark. Their speed makes them hard to flank but if the opportunity presents itself, the glowing power cell on an ÜberSoldat's back is a weak point. Lastly, ÜberSoldaten can be taken out instantly with a melee takedown just like their human counterparts.

When the player is in stealth in certain areas ÜberSoldaten will be found standing completely still, seemingly in a stand-by mode. In this state they do not react unless they are provoked or the alarm is raised, making them easy to destroy with stealth takedowns. If one is found standing about or walking around, their eyes turn red on alert when spotting you. Occasionally, deactivated ÜberSoldaten can be found hung on racks; these are inert environmental objects and do not attack the player under any circumstances.

BJ smashes an ÜberSoldat with his hatchet.

The ÜberSoldat's Achilles heel, the energy core behind its back.

An ÜberSoldat firing its energy weapon

Soph bending an ÜberSoldat's arm back to destroy it.

One of the twins fighting the Robotermörder.

Robotermörder when viewed from The Collectibles tab 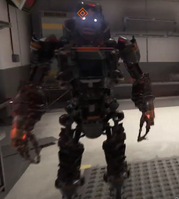