Wolfenstein Wiki
Register
Don't have an account?
Sign In
Advertisement
in: Nazi Soldier, The New Colossus enemies, Axis,
and 8 more

"Alright, Blazkowicz. While the guys are off kicking ass and revolutionizing...you and I are gonna tie some loose ends by taking out any Übercommanders left on the board. Get on the Engima machine and the war map and do you thing. I'll be your com support. Come on, let's pave the way for our people on the ground."
―Grace Walker to B.J. on dealing with the Übercommanders.[src]

Übercommanders (Supercommanders), also and more formally known as Überkommandanten, are highly influential and important commanders in the German military who are under command of General Irene Engel in Wolfenstein II: The New Colossus. They are currently stationed in the United States of America and B. J. Blazkowicz is tasked to assassinate them all. According to Grace Walker, killing all the Übercommanders will destabilize the entire Nazi chain of command in the US by making sure Engel will not have any successors. They can also be seen in Wolfenstein: Youngblood, tasked with important missions. UberKommandant is high rank officer which can be encountered during assassination missions or Abbey's random tasks. They are more durable than Kommandant or Kampfkommandant.

Not all Übercommanders are German, such as Roderick Metze, a former American dentist. But due to The Freedom Chronicles being non-canon, this is yet to be seen. After B.J. successfully assassinates all Übercommanders, the entire Nazi chain of command in the US crumbles leading to disorganization of the Nazi occupational force in the US.

They are high rank officer which can be encountered during assassination missions or Abby's random tasks. They are more durable than Kommandant or Kampfkommandant. They can come equipped with various weapons, such as Kugelgewehr, Elektrokraftwerk. There are only a few named Übercommanders in the game, namely Bayer and Fleischer, however randomly spawned Übercommanders can be seen quite often due to Abby's task.

An Übercommander in hazmat suit.

An Übercommander with normal uniform. 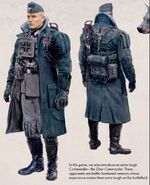 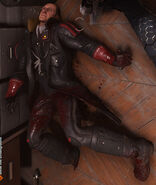