The AR Marksman is a scoped select-fire weapon available in Wolfenstein: The New Order.

The AR Marksman is a select-fire rifle issued to elite Nazi personnel in 1960. Visually, it resembles the standard Assault Rifle 1960, though internally it is fundamentally different, and uses an additionally unusual form of ammunition. While in its default configuration, the AR Marksman fires high-caliber rounds semi-automatically while the weapon's barrel is at full extent and the scope is available for use. As a marksman rifle, this weapon is the best ranged choice in The New Order, despite the rather low scope magnification by sniper standards. A direct headshot is often enough to kill any standard enemy instantly.

When upgraded, the weapon can also be switched to become a fully-automatic plasma rifle. Upon switching modes, the scope swivels off its base to the right hand side of the rifle revealing an energy meter and the barrel retracts. In this mode the AR Marksman behaves similarly to a weaker LaserKraftWerk, and drains battery power just as quickly. The configuration is first encountered on the Nazi Lunar Base, where it is used extensively by the installation's staff; Lunar AR Marksmen cannot be switched to normal operation. The AR Marksman in plasma rifle mode is vulnerable to Tesla Grenade explosions, which can drain its battery instantly.

AR Marksmen are rare finds during gameplay and their ammunition rarer, so careful use must be planned ahead of time if the weapon is to be fielded. Dual-wielding the weapon in the default configuration is very wasteful as a result, though much less so in plasma mode due to the overly abundance of power nodes during the late stages of the game. 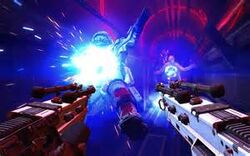