Wolfenstein Wiki
Register
Don't have an account?
Sign In
Advertisement
in: Disambiguation, Nazis, The New Colossus characters,
and 11 more

Edit
watch 02:13
'Wolfenstein' Profile: Adolf Hitler
Do you like this video?
Play Sound

Adolf Hitler (April 20, 1889 - April 30, 1945 - World War II) is the "Führer" (leader) of Nazi Germany during the second World War and an important figure in the Wolfenstein series. Hitler was the main antagonist of the main episodes of Wolfenstein 3D, and the Original Encounter (the Claw of Eisenfaust). However, he leaves his mark in almost every game of the series in some way as the one who created the Nazi Regime, and is directly behind the scenes (sometimes even the mastermind) of many of the operations and projects that Blazkowicz is sent to destroy.

Hitler was the major villain of the original Wolfenstein 3D, where he, as "Mecha-Hitler", became a well remembered and iconic pop-culture character. Since then, the series has seen reboots, partial-reboots, soft-reboots, and hard-reboots, and yet people have continued to ask for the fabled Mecha-Hitler's return.

According to iD developers, Wolfenstein didn't have Hitler because it was a 'timeline thing', meaning Hitler had already been defeated. They said RTCW took place after Wolfenstein 3D and their game took place after RTCW.[1] This also is referenced in the official Strategy Guides for RTCW. This was later reflected in the released graphic novels for Wolfenstein 2009.

Even as far back as the the Strategy Guide for RTCW claimed that Wolfenstein 3D (or at least the Eisenfaust portion of the campaign) took place before Return to Castle Wolfenstein.

Even the developers for MachineGames reboot have claimed that Wolfenstein 3D is canon to their series and takes place before their game. Though obviously in most examples RTCW, and MachineGames series Hitler turns out to be very much alive and well after his encounters. He is extremely hard to kill or simply won't stay dead. Himmler returns to Berlin to speak to the Fuhrer in RTCW, and Hitler is very much alive in The New Colossus timeline. In the Old Blood its even discussed that Hitler survived one of his encounters with Blazkowicz at Castle Wolfenstein.

This is not entirely a problem if one considers even in the games related to original Wolfenstein and Spear of Destiny multiple villains routinely returned according to the stories having healed from their wounds somehow.

If all the versions and timelines and references are taken into account, there are at least 2-3 'Encounters' between B.J. Blazkowicz and villains such as Hitler, Schabbs, and Grosse Family. 1-3 before 1943, and another at the end of the war. Similar encounters but the locations of the battles changed. Likewise the Spear of Destiny is stolen and recovered several times, with the same villains reprising their roles. Even Hans Grosse got a chance to return in Wolfenstein 2009.

There are at least two encounters for Hitler First Encounter & 3rd Encounter but there is possibility of even the '2nd Encounter" at some point as well. However, how he returns each time is not explained... be it left for dead and 'surgery', 'resurrection', or 'cloning' or some other method. In general he is left for dead (or B.J' removes his head to make sure of his death as he did at the end of the events of the original Wolfenstein 3D set at the 'end of the war')

Adolf Hitler was born in Braunau am Inn, Austria on April 20th 1889. Against his father's wish for him to become a civil servant, Hitler studied the arts but was rejected. He volunteered for army service in 1914 as a soldier of the German military.

After the war, Hitler joined and took over the Deutsche Arbeiterpartei (German Worker's Party, DAP) after using its leader Anton Drexler a puppet and used it as a platform to found his new party in 1920 the Nationalsozialistische Deutsche Arbeiterpartei/National Socialist German Workers Party (Nazi Party, NSDAP). He then worked his way into the German political system through several contacts, eventually becoming Reich Chancellor of Germany, serving under president Paul von Hindenburg, whom he eventually succeeded in 1934.

Hitler seized control of the party following Hindenburg's death and immediately appointed himself Führer (supreme leader) of the Third Reich and sought to improve the nation's economy and infrastructure, before setting up several political alliances with his neighboring nations, most notably Italy, Japan, Hungary and the Joseph Stalin-led Soviet Union. The pre-war Germany was even loose partners with the United States, then-recovering from the consequences of the Great Depression.

In an effort to further expand the economic growth of Germany, Hitler wished to squire the city of Danzig, a free city, but was refused by the Polish government, eventually culminating in the outbreak of World War 2 on September 1, 1939 with his Third Reich forming the leading faction of the Axis. Hitler expanded his reign of terror across the globe before being defeated in 1945, or winning in the alternate timeline.

In the Wolfenstein series[]

Adolf Hitler appears in Beyond Castle Wolfenstein as a main goal of an assassination attempt by the player inside his secret bunker (Wolf's Lair). This was based on a depiction of the real-life attempt on Hitler's life at Wolf's Lair on July 20, 1944.[2]

The goal is to find a bomb and place it outside of the room where he is holding a meeting with officers. After that, the player has to escape, while the bunker is shown to be blown up. A "Wolfenstein Lore" section of the Return to Castle Wolfenstein manual refers to this, incorrectly attributing it to the previous installment in the series:

"Silas Warner's classic Apple II game, Castle Wolfenstein, was released in 1983. The game was far from a 3D shooter, requiring more stealth than gunplay. The player's mission was to infiltrate Nazi headquarters in disguise, plant a bomb outside the door to Hitler's bunker, and make it out before the bomb exploded."[3]

There are multiple versions of accounts of attempts and attacks on Hitler according Wolfenstein material, and via various game endings per the versions of the games. The official guides via backstories for the games even discuss his 'suicide' supposedly on April 28, 1945 (in reality he actually died April 30th). So between all the variations, the versions are not necessarily 'consistent'. Some sources place Wolfenstein 3D in early 1942/43/44 as a representation of one of the early attempts on Hitler's life, while others place it as late as February, 1945 (still earlier than his actual death in the Führerbunker). Some versions have two campaigns in which Hitler is fought at the end of both campaigns (see Original Encounter and Third Encounter). The Old Blood/New Order timeline may even place the attempt as late as 1946.

Hitler is briefly mentioned in Return to Castle Wolfenstein at the very end of the game: after BJ defeats Heinrich I, Heinrich Himmler is urged by an officer to hurry to Berlin, as "The Führer is expecting [his] arrival."

He is also be seen on propaganda portraits throughout the game, as well as in Wolfenstein.

The war ended perhaps around the same time it did in History (or as early as February, 1945, as that is the date was given Wolfenstein 3D Classic which contains some connections to the OSA series).

According to connected Graphic Novels at the time of Wolf2, the Fuhrer is dead (having been killed in Wolfenstein 3D, the exact date for that game unknown, but might relate to the February, 1945 date given in Wolfenstein 3D Classic), but the Third Reich rises again under an organization calling itself the Fourth Reich (or at least would call itself the Fourth Reich following the events of the destruction of the SS Tirpitz or some point shortly before).

Shortly before B.J. destroyed the S.S. Tirpitz, during his attempt to stop Operation Eisenfaust, he had fought Hitler apparently at Schloss Hollenhammer, shooting him in the chest wounding him, and leaving him for dead. The major defeat would seemingly be the beginning of the end of the war. Furthermore the comics may suggest that Return to Castle Wolfenstein occurred after Wolfenstein 3D, in which the plans to resurrect Heinrich I was to create a new leader, as Hitler was thought to be dead at the time (another change from the previous timeline in which Fuhrer was still alive in RTCW).

Later, Anton Kriege learned of Hitler's plans, and the Spear of Destiny, after looking into BG's past and learning of his missions with the Office of Secret Actions. Central Command still exists in Berlin, but it appears to have noticeably been weakened by the actions of the Allies and groups such as the Kreisau Circle, to the point that the Third Reich (or its successors the Fourth Reich) are forced to try to battle and reconquer sections of its own country in Germany. They had just captured Isenstadt a few months before the game.

While Hitler's paintings still occupy positions of prominence in offices, manors, and/or old propaganda posters, and newspaper/clippings. There is little mention of him, and never by any individuals. Himmler appears to be in charge (of at least the SS Paranormal Division) in Berlin, and Wilhelm Strasse appears to be both an individual in charge of "High Command/Central Command" (according to documents obtained during the Castle, Airfield and off his Zeppelin) as well as the true mastermind behind Operation Nacht Sonne (which he oversaw from the Castle, and left Zetta to do most of the dirty work). With many believing Zetta was in charge, despite being Strasse's underling, there were rumors that Strasse was brought in by Central Command as Zetta's replacement. Strasse did not have a picture of Hitler in his castle, but rather a rather ostentatious painting of himself (he was at least very egotistical) along with documents possibly linking him higher up into Berlin's Central Command, to suggest he may have more or less taken over the Third Reich in Hitler's place with Heinrich Himmler.

Another difference in this timeline c. 1945 is that it appears that D-Day landings of June 6, 1944 never happened, and Allies are struggling against the resurgent Nazi forces (London is left dangerously vulnerable to missiles [with no apparent air defenses], leaving B.J. to have to take them out himself). It is also confirmed that B.J. thwarted the Nazi's Spear of Destiny plans (though its unclear if this was a direct reference to original Spear of Destiny game, or possibly even to the Wolfenstein RPG that came out a year before).

In Wolfenstein RPG, the paintings include Axis Leader with a goatee, a parody of Hitler where his mustache has been moved to his chin. The Fuhrer can be punched for some amusing animations. Other than that there are few, if any, direct references to Hitler or Nazis (as the game underwent censorship). However, the greater parts of the story, is part of the id Universe timeline which ties all or most of of id Software's major series together in a single timeline.

Hitler as he is depicted in Beyond Castle Wolfenstein. 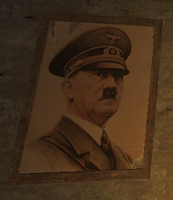 A portrait of Hitler. 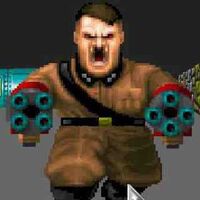 Hitler's death at the hands of BJ Blazkowicz. 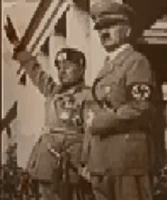 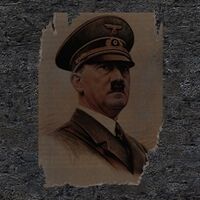 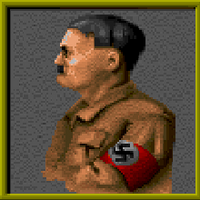 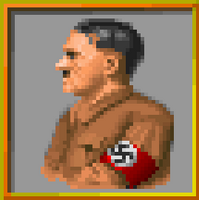 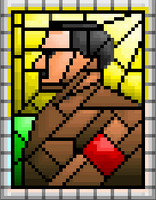 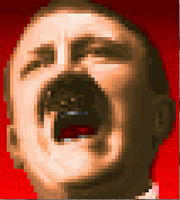 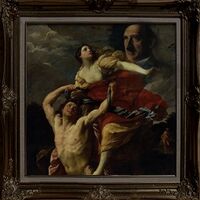 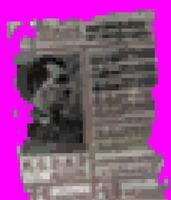 MechaHitler's battle with BJ Blazkowicz, as depicted in the Wolfenstein (2009) comic adaptation

MachineGames timeline: Hitler making a speech outside the newly-conquered Capitol Building, Washington D.C., as depicted in promotional material for Wolfenstein: The New Order. 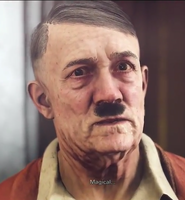