"Throw a grenade and duck around the corner. Before I got out of that death-trap, I had developed that response to anything...throw and duck. That, I'm sure, is why my head feels like something that was borrowed from some poor relation."
―Allied Soldier[src]

He is the inspiration for William Joseph B.J. Blazkowicz in later games.

At some point during World War II, Soldier either enlisted or was drafted by the Allies to fight against the Axis forces. As of August 17th, 1943 he had risen to the rank of Captain within the Air Force[1] and acted as the bombadier for a B-17 bomber crew in the Schweinfurt raid on a Nazi fighter plane manufacturing plant somewhere in Europe, during which his bomber was shot down by 'fighters that were supposedly drawn south with the other formation', killing most of his other crewmates. The Soldier survived the crash landing but was captured by Nazi soldiers. Recognising his status as a bomb aimer, the Soldier was taken prisoner and led back to Castle Wolfenstein for interrogation in the hopes that he might give them information on the US' Norden bombsight instrument.[2]

"I was sure that they were going to shoot me until one of the officers recognized that I was a bombardier. All that I remember after that was one word which kept reoccurring in their conversation--Wolfenstein."
―Allied Soldier[src]

Soldier languished in Castle Wolfenstein for several days[3], sharing a cell with a British Soldier and taking it in turns to be subjected to the SS' interrogation methods. One day his cellmate, fatally injured after a failed escape attempt, passed a gun and ten bullets to him and told him that it was vitally important that he find the plans for Operation Rheingold, which he knew were being kept somewhere in the castle, and escape across the border to Switzerland from where the information could be passed on to Allied intelligence and he could get back home. Vowing to complete his fallen comrade's mission and staying with him to his final breath, the soldier loaded his gun and began navigating the labyrinthine corridors of Castle Wolfenstein, dodging SS agents, gunfighting stormtroopers and looting rooms and bodies for supplies. After successfully retrieving the plans, he escaped from the Castle using an escape route told to him by a fellow prisoner accidentally caught in the crossfire of a gunfight between him and a German soldier. After escaping, he spent the next few days trekking across the country avoiding Nazi search parties[4] until he finally reached the safety of the neutral Swiss border.

Some time after his escape, he was given a new assignment: to infiltrate a German bunker where Adolf Hitler would be holding a top-secret meeting with his senior staff, to plant a bomb in the conference room where the meeting would be held and to get out again.

Behind the scenes Edit 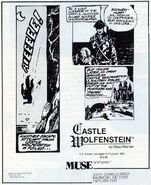 Retrieved from "https://wolfenstein.fandom.com/wiki/Allied_Soldier?oldid=59815"
Community content is available under CC-BY-SA unless otherwise noted.