"Tuning the harmonic frequencies has proven much harder than we thought. Every test subject that passes through the portal still returns to us altered"
―Head of the Scientist[src]

The Altered (German: Veränderte) are humans sent directly into the Black Sun Dimension and transformed into insane beasts. They return to Earth in a grotesquely monstrous, extremely strong, and physically massive form: they are the largest normal enemy in Wolfenstein. It is the first boss of the game.

Altered are found in mercifully few levels, as it is the rarest encountered enemy aside from the actual bosses. One is first encountered in the Hospital mission which is the only time it is fought as a boss, whereas later times in the game they are just enemies that can be easily defeated, as by then, B.J. will be in possession of much heavier firepower. They are also the only enemy that is always hostile to other enemies, as the Nazi forces are not truly in control of them; Sniffers may be hostile to enemy troops in their first appearance, but are later only seen under the complete control of Scribes.

Altered may hurl rocks or nearby corpses at B.J., but do not carry or use any equipment, and thus, drop nothing after they are killed.

Altered outside of the Castle. 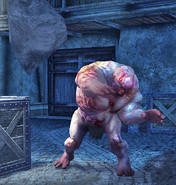 An Altered throwing a rock