Wolfenstein Wiki
Register
Don't have an account?
Sign In
Advertisement
in: Groups, Kreisau Circle, The New Colossus characters,
and 7 more

American Resistance is the network of multiple resistances groups that opposes the Nazi occupation in the American Territories.

Founded by a handful of people ranging from civilians to ex-military personnel, following the end of World War II. The group scattered across the U.S.A. in an attempt to revolt against the Nazis, but was crushed every time from the year of 1945 to 1960 with after many failed efforts in fighting the Nazi regime, they nearly lost their hope. However, everything changed when B.J and the Kreisau Circle arrived and helped them launch the Second American Revolution.

The Resistance first appearance was Wolfenstein II: The New Colossus where they played a major role. Following the death of Nazi supreme commander Obergruppenführer Irene Engel, The American Resistance have established another front to fight the Nazi worldwide called the Global Resistance with most of the members absorbed into it.

The following individuals only appear in The Freedom Chronicles which exist as works of literary fiction within the Wolfenstein setting; as such their existence, and the veracity of the events involving them, within the "real" chronology is questionable at best.

The Panzerhund reprogrammed and used by The American Resistance. 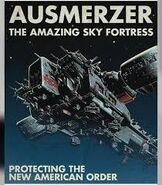 Ausmerzer, flying fortress stolen from the Nazi by Bj and the Resistance.

Members of the Manhattan Resistance group led by Grace Walker.

A Haunebu-V stolen by B.J. from Venus Oberkommando.

The Eva's Hammer, captured by B.J. and transferred to the American Resistance.

An atomic bomb disguised as a fire extinguisher. The Eva's hammer has more bombs.

One of the three stealthy helicopters stolen from the Nazis.
Community content is available under CC-BY-SA unless otherwise noted.
Advertisement