"A German Army service rifle with a fire selector for switching between automatic and semi-automatic fire mode. Useful when taking on multiple enemies at once at medium range."
―Journal description.[src]

The Assault Rifle 1946 (German: Sturmgewehr 1946) is a weapon in Wolfenstein: The New Order. It is the staple weapon of the Nazi infantry during the game's prologue and the first production assault rifle to ever be introduced in the world and weapon industry in this timeline.

Replacing the bolt-action Karabiner 98k rifles as a standard weapon for the Nazis soldiers, the Assault Rifle 1946 packs quite a punch when compared to the lowly starting SMG and is often the immediate replacement for that weapon. The weapon itself has a slight resemblance to the real life STG-44. It has quite the punch, with a moderate rate of fire. And although BJ appears to wield it with ease, it is quite heavy and your speed is dramatically lowered when two are wielded at once. If the player wields two Sturmgewehr 46 it makes up for the slow rate of fire, and it increases the damage output by a factor of two.

It is completely superseded by its 1960 successor after the timeskip, though it is usable in the hidden Nightmare sequence.

The AR 1946 in the prologue of the New Order is very similar to the one encountered in The Old Blood, except the variant in the New Order has a slower rate of fire, plus it only has a secondary fire that's semi automatic instead of burst shot. This is probably a newer model encountered at Strasse's compound to probably cut costs down for the weapon. Also probably for increased accuracy and damage. 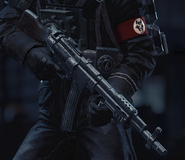 Assault Rifle 1946 in the hands of a Nazi Soldier. 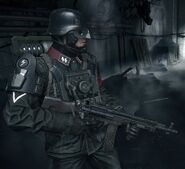