"A German Army service rifle with a fire selector for switching between automatic and burst fire mode. Useful when taking on multiple enemies at once at medium range."
―Journal description.[src]

The Assault Rifle 1946-T (German: Sturmgewehr 1946-T) is a weapon in Wolfenstein: The Old Blood. It is the staple weapon of Nazi infantry throughout the game.

Near the end of the game this weapon can be seen used by certain Shamblers against Blazkowicz, however inaccurately due to their inability to aim down the sights.

The Assault Rifle 46-T being fired.

The Assault Rifle 46-T being reloaded. 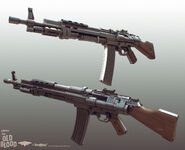