"An updated version of the 1946 assault rifle. Has an increased magazine size and fire rate. Useful when taking on multiple enemies at once at close to medium ranges."
―Journal description.[src]

The Assault Rifle 1960 (German: Sturmgewehr 1960) is a weapon in Wolfenstein: The New Order. It is the updated version of the one seen and used during the prologue and effectively replaces that weapon after the timeskip.

The Assault Rifle 1960 is designed to be a fully automatic weapon that is more versatile and robust than its 1946 variant. The weapon fires faster and also has significantly less recoil than the earlier model and allows for much more accurate shooting. The 1960 variant retains the ability to be dual-wielded.

An underbarrel drum-fed semi-automatic micro rocket launcher replaces the rifle's selective fire functionality, though also allowing it to act as a heavy-hitter to use against larger enemies such as the Super Soldier and various robots. Rocket ammunition is fairly rare in the game world and are often found in boxes of four, so careful use of the mode must be thought out clearly so as to avoid wastage. 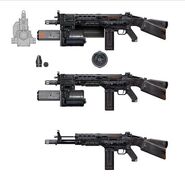