Wolfenstein Wiki
Register
Don't have an account?
Sign In
Advertisement
in: Vehicles, Nazis, Wolfenstein II: The New Colossus,
and 5 more

"Frau Engel commands it now... using it to hunt terrorists, but in the way back... the Ausmerzer would roam from city to city. Crushing any resistance."
―Horton Boone on the Ausmerzer.[src]

The Ausmerzer (German for 'eradicator') is a large fortified airborne platform used by the Nazis, which plays a significant role in the plot of Wolfenstein II: The New Colossus.

The Ausmerzer was built and put into service around 1951, as a guardian of the new American order similar to the London Monitor in Britain. In the years that followed, under the initial command of Gernot Herrmann the Ausmerzer would crush large-scale resistance to Nazi dominion across the United States during the so-called Liberation War, but smaller cells including a far-left faction in New Orleans and the remnants of the Black Revolutionary Front in Manhattan were able to escape its attention.

Sometime in late 1960-early 1961 command of the Ausmerzer was transferred to Irene Engel, who was promoted to general during her tenure in this position, and Oberleutnant Anselm Decker. By this time the Ausmerzer's primary target switched from uprisings to terrorist cells, though a map in the ODIN control center labelled "Flugrouten Des Ausmerzer" ("flight routes of the eradicator") indicates that it was still performing at least some fixed patrols in August 1961. Engel used the craft to track down the resistance-controlled Eva's Hammer in the northern Atlantic ocean, following signals transmitted by Nazis hidden inside Section F of the U-Boat; an assault upon the Hammer by the Ausmerzer's complement of troops was attempted on June 25 but was repelled, though it succeeded in killing several Kreisau Circle members including Caroline Becker.

On the evening of July 4, 1961, the Ausmerzer descended upon the former Blazkowicz residence in Mesquite, using its claws to lift the farmhouse from the ground, and uprooted the house with its mechanical claws in order to apprehend William J. Blazkowicz who was inside the house at the time. Although Blazkowicz was able to disable the claws, this merely resulted in him being knocked out after falling a great distance along with the disintegrating house; a squad from the Ausmerzer's complement of soldiers was then able to remove his armor and take him into custody.

On 12 August 1961 the Ausmerzer was wrested from Nazi control in a joint operation by the Kreisau Circle, the Black Revolutionary Front led by Grace Walker and Horton Boone's left-wing resistance group, to prevent it from resuming its former role during their planned uprising. Sigrun Engel provided them with the password to override the airship's automated defence systems and William J. Blazkowicz and Anya Oliwa slaughtered the troops on board; in resistance hands it was presumably turned against its former masters during the Second American Revolution.

The Ausmerzer is the only aircraft of its type, and such craft have not replaced more traditional Zeppelins, as several Zeppelins are seen above Paris in 1980, almost two decades after the Ausmerzer's appearance.

Befitting its role as a counter-insurgency platform, a role requiring quick and precise strategic movement, the Ausmerzer's anti-gravity engine allows it to move rapidly across the vast breadth of the continental United States. It transports a large complement of mobile forces including infantry, Supersoldaten, ÜberSoldaten , at least one Panzerhund, a Zitadelle unit, two Zerstörers and smaller vehicles, including a complement of Silverfish submersibles which are escape vehicles.

In addition to its garrison the Ausmerzer itself is heavily armed - observed weapons include Lasergewehren on pintle mounts throughout interior and exterior areas, deck-mounted flak and artillery cannons, depth charges for attacking submerged targets, ventral launchers loaded with guided air-to-air missiles and rocket-propelled transport pods used to rapidly deploy Super Soldiers into battle, even onto its own outside decks in flight. It's hardened against electromagnetic pulses, as demonstrated when it remains operational in close proximity to a nuclear explosion in New Orleans, and it can deploy extendable cables fitted with claws or large magnets to grab objects below it; its engine power is such that in addition to lifting its own mass it can uproot an entire house from the ground or forcibly surface submerged U-boats when the cables are deployed. It is also known to be equipped with radar. According to a maintenance report, if the anti-gravity field engine is over-exerted it could detonate with force comparable to a nuclear explosion.

Operation of the Ausmerzer is heavily automated by way of the ODIN computer system. The interface for this system is divided into a main control center and the subsidiary HUGIN and MUNIN control centers which control the port and starboard side defenses respectively. While Oberleutnant Decker believed that ODIN was the most sophisticated system of its kind in the world, at least one technician who worked on board suggested that it was actually quite outdated and in need of modernization; this was never actually done as it was decided that the airship would be too vulnerable without its automated defenses during a refit. Despite the Ausmerzer's high strategic value the computer security for ODIN is less than stellar: all three control centers have the same password, namely the word "Valhalla", which when entered allows complete control over all systems slaved to that computer.

In the Freedom Chronicles[]

In Curtis Everton's graphic novels The Diaries of Agent Silent Death and The Amazing Deeds of Captain Wilkins the Ausmerzer is depicted in the background of some panels, but it appears only briefly in single panels and plays no role in the actual plot of either story.

Fighter craft are deployed from the Ausmerzer's hangars to engage resistance helicopters.

Pod loader in the Ausmerzer. 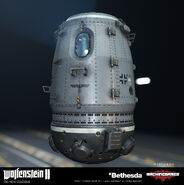 Supersoldaten are deployed in pods from the Ausmerzer's launchers onto its upper decks to engage B.J. (not that they help very much).

The Ausmerzer attacking the Eva's Hammer.

The magnets released from Eva's Hammer by Blazkowicz.

The claws detaching from the Blazkowicz ranch house.

The Ausmerzer looming near a monolithic mooring tower. The city below appears to be Los Angeles.

The hatch where the Silberfish uses to deploy itself into the ocean.

The Ausmerzer endures the nuclear blast from the Eva's Hammer. 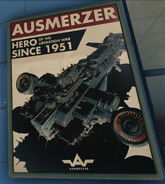 Missile pod of the Ausmerzer.

A map indicating the deployment routes of the Ausmerzer.
Community content is available under CC-BY-SA unless otherwise noted.
Advertisement