The Baltisches Auge (lit. “Baltic Eye"), also known as the Stomper, is an enemy machine in Wolfenstein: The New Order. It first appears during the prologue at the beachhead surrounding Deathshead's compound. 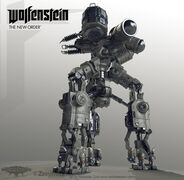 The Baltisches Auge in action 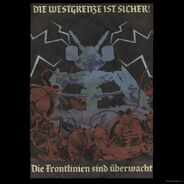 The western border is safe! The front lines are monitored
Community content is available under CC-BY-SA unless otherwise noted.
Advertisement