"Billy Blaze" (also known as Commander Keen) is the father of twins Billy and Billie Blaze, protagonists of the mobile adventure game Commander Keen. He appears to be a grown up version of the original Keen, and judging by photographs in his house shown in Commander Keen's trailer, is a member of the Blazkowicz family. It's currently unknown if his full name is William Joseph Blazkowicz II.

Even as an adult, he still sports a purple T-Shirt and yellow football helmet. 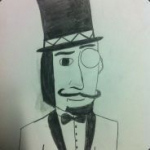