Wolfenstein Wiki
Register
Don't have an account?
Sign In
Advertisement
in: The New Order characters, Kreisau Circle, The New Colossus characters,
and 8 more

Edit
watch 01:49
Who is Bombate?
Do you like this video?
Play Sound

Bombate is a resistance fighter and later a member of the Kreisau Circle in Wolfenstein: The New Order. He returns in Wolfenstein II: The New Colossus.

Bombate was raised on the streets of Windhoek, South-West Africa (Namibia). As the Nazis began conquering more and more of the African continent, Bombate traveled north to fight them. After two years of leading successful counterattacks on the invading army, Bombate was captured and imprisoned in a forced labor camp in Belica.

In The New Colossus, Bombate reveals to Max Hass that he watched his friends, family and children be murdered, leaving him scarred. He would go down a "hole", trying to keep the pictures out of his head.

As B.J. goes undercover as a prisoner at Camp Belica, Bombate is the first of the laborers to greet him. He tells B.J. which block Set Roth is kept in, also suggesting that B.J. should swap uniforms with another laborer named Milo to get in. After B.J. and Set avoid execution by hijacking a robot, Bombate and the other prisoners escape. However, before they can drive off, Frau Engel appears and shoots several escapees, including Bombate. Despite his injuries, he manages to escape to the Kreisau Circle's Berlin hideout.

Bombate and the other members of the Kreisau Circle are later captured by Nazi soldiers led by Frau Engel and taken to Deathshead's compound. He is found alive along with the other Circle members by B.J. and escaped from the compound before B.J. ordered to destroy the facility.

Bombate is seen in the opening of The New Colossus next to Max Hass, once B.J. arrives with Anya and Set. During the meeting to bomb Area 52, he is shown to share some of Grace's distrust of the ex-Nazi Sigrun Engel, Frau Engel's daughter.

Despite this, Bombate has sex with Sigrun in the minisub, and is caught by B.J, Grace, and other Kreisau fighters. After the encounter, Sigrun falls in love with him. Despite Bombate's usual shows of compassion, he is revealed to be something of a womanizer; sleeping with Sigrun without emotional attachment, and cheating on her with Mary Sue. Eventually, he is called out by Sigrun, who declares her love for him, then professes that she "does not need him [for her] to be happy." She says she will, however, "mentally use him from time to time for her own personal pleasure."

Bombate is a friend of Max Hass and tries to cheer him up. However, it fails. Bombate tells Max after he rejected to playing football that he lost friends and family back when he was fighting Nazis in Africa.

Bombate appears to have become B.J.'s flyer into and out of missions, telling the latter that they make a good team.

Bombate portrays himself to be joyful and supportive, often having a smile and inspiring his allies to fight against the Nazis. That being said, it's shown that he suffers with depression, but won't go into the hole again after seeing his family, friends, and children murdered. He cares for his allies deeply, often telling B.J. that he worries about him and states he looks pale amidst his injuries. Another example is to Wyatt after he has a hallucination of bodies crawling towards him, ordering him to rest. Despite his supportive personality, he could be reckless with his sexual relationships, cheating on Sigrun with Mary Sue and not expressing his love for the former.

Bombate in The New Order.

Bombate with Anya and Set, being captured by Engel.

Bombate with the resistance, reuniting with B.J. in Deathshead's Compound. 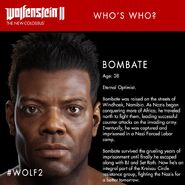 Max refuses to allow Bombate to kill Rosa for food.

Bombate and the group at a mission briefing. 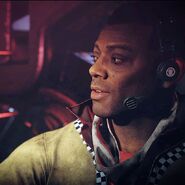 Bombate with B.J. and Sigrun.

Bombate holds Anya back during the head transplant.

The group hears Bombate having some private time with Sigrun.

Bombate being slapped by Mary Sue after learning he was in a relationship with Sigrun.

Bombate listening to Grace talk about taking over the Ausmerzer. 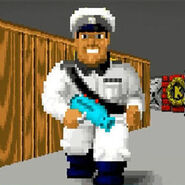 Bombate as the Episode 4 boss in Wolfstone 3D.