Bramburg Dam is the first part of the Return Engagement mission of Return to Castle Wolfenstein. 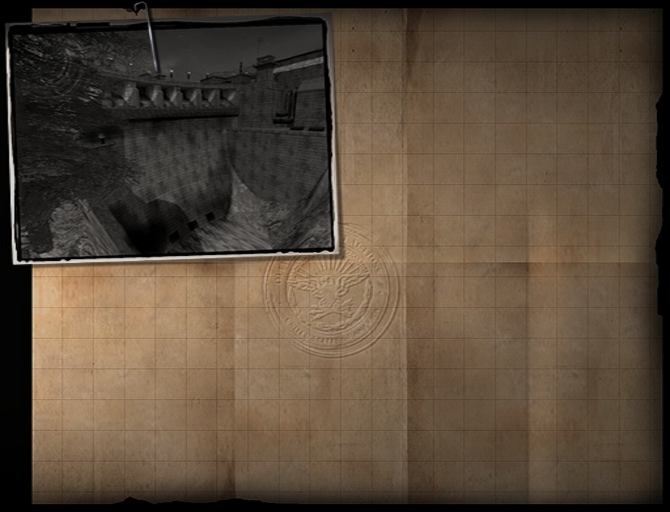 The mission begins on a hill overlooking the gate from the cut scene. Stealth is recommended but not critical for this mission so limit use of the Snooper, you'll need it in the next mission. Make your way to the base of the guard tower. Killing the truck driver or the guard by the gate will result in an alarm being sounded. Near the tower is a ladder leading to a catwalk on the side of the dam. Follow the catwalk until a Panzerfaust causes it to collapse. Jump across the gap to the ladder than climb down to a second catwalk (climbing up leads to a dead end). Some soldiers may exit the dam from a door ahead of you kill them and go inside.

You will now enter a long corridor with more guards. There are two doors other than the one you came through. One can only be opened from the other side (see Secrets below) the other is locked but can be opened by shooting the canisters on the wall opposite it. Kill the guard in the next room and deactivate the alarm if it had been sounded. Take the elevator up to the next level. If the alarm had been sounded a Black Guard will fire on you from the platform above, if not he will be in the next room.

The next door leads to a bunker midway across the dam. There is a machine-gun facing the gate. There are guards on the road between you and the gate and snipers and alarm boxes in the towers. Use the Snooper or a scoped Mauser to down the snipers than turn your attention to the guards on the road. Follow the road to the left (away from the truck) then enter the building on your right. Kill anyone inside than crawl through the vent in the radio room. If an alarm had been sounded a Panzerfaust will destroy the next grate. If not proceed past it (the grate is indestructible otherwise) and exit from a breakable grate farther ahead.

You will now be in the dam's power plant. If you are using a stealth approach a guard will be facing away from you and you can disregard the lower portion of this room. Otherwise kill the guard and engineer in the lower portion and on the machines then turn your attention to the raised platform. There is a Black Guard and a Panzergrenadier in the adjoining rooms. They will join the fight if you weren't able to kill the guards in the machine room silently.

Proceed down the stairs and watch for the Black Guards in the next room. The last door will take you outside where there are a few more guards. One will be near the crates ahead of you the others will be on the road or in the guard house to your left. Kill them then check the guard house for supplies. The gate will take you to the next mission.