Leader of the Kreisau Circle

This article is about the character that appears in the Original Timeline. For the one in the MachineGames reboot, see Caroline Becker (MachineGames).

She is one of the few characters that was adapted into the reboot of the series by MachineGames.

Caroline was born in Isenstadt (former Eisenstadt, Austria) in May 10th, 1922.

She was a former schoolteacher.

Following the false end of World War II in early 1945 after Hitler's death, and the failed attempt to resurrect Heinrich I to replace him (both by William J. Blazkowicz's hand), after the rise of Third Reich remnants (Fourth Reich) back to power: Her hometown was invaded when the Nazis reconquered her region and took over her town.

She formed the Kreisau Circle after her father was shot dead in the streets following Viktor Zetta's declaration of martial law (a few months before the start of the story).

Caroline was responsible for bringing Engle into the Kreisau Circle after nursing him back to health following the execution of his wife, and apparently regards him the same way she did her own father.

Caroline is initially hesitant to trust B.J. Blazkowicz, even with Erik Engle's endorsement of him, and expresses skepticism that he will be able to infiltrate the heavily-guarded Nazi dig site. She becomes more trusting of him following his success, in contrast to Dr. Leonid Alexandrov of the Golden Dawn trusting B.J. less and less as the campaign goes on. She is aware from the beginning that there is a mole somewhere in the city's resistance network who is feeding information to the Nazis, and warns B.J. that this person must have tipped off the Nazis as to his arrival at the train station.

At the end of the Midtown string of maps, if questioned repeatedly, Caroline will say she is going to meet a contact who has information that may assist the Kreisau Circle. This turns out to be a trap arranged by either Anton Kriege or Dr. Leonid Alexandrov, and Caroline is taken prisoner as B.J. transitions from Midtown to Downtown, being taken to the fortified castle overlooking the city.

B.J. agrees to assist Erik Engle in storming the castle and attempting to free Caroline, chasing down Hans Grosse. On the roof he finds Wilhelm Strasse waiting for him, along with a machine designed to harness the power of the Veil. B.J. confronts Strasse, but backs down as he sees Hans has a Luger pointed at Caroline and drops his weapon. Strasse orders Hans to shoot B.J., but Caroline manages to knock his hand aside, the shot damaging the machine. In the ensuing scuffle, Caroline appears to have been fatally wounded by a gunshot from Hans' pistol.

Shortly after Caroline is shot, the Queen Geist comes through the Veil and vaporizes what is left of the energy siphon machine. B.J. tries to check Caroline's pulse, but is distracted, first by trying to shoot at the fleeing Deathshead and Grosse, then by the Geist Queen. The Queen later pulls B.J. and everything else in the vicinity into the Black Sun dimension. The Queen then flies at B.J. for a killing blow, but flinches and drops him outside the castle. How Caroline escaped further damage during the ensuing battle or where she ended up is not known. Most of her fellow Kreisau Circle members believed she was dead, and Erik Engle takes over as the new leader in her place. Following Hans Grosse's defeat, the Zeppelin crashes into the castle and explodes, incinerating much of what was left.

She apparently has roughly equal standing to Erik Engle in the Kreisau Circle; other members of the Circle say that Caroline is the brains of the operation while Erik is the heart.

Caroline being shield by Hans Grosse at the top of the castle. 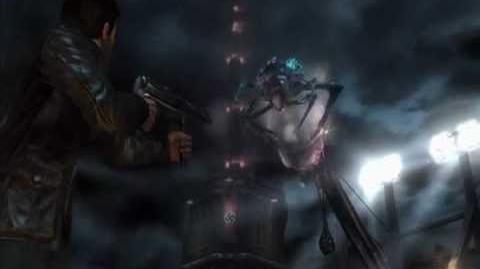 Caroline Becker discussing a mission to B.J for the Dig Site Operation.