Edit
watch 02:54
Who is Caroline Becker?
Do you like this video?
Play Sound

Leader of the Kreisau Circle

K.I.A.: Beheaded by Irene Engel on the Ausmerzer

"Never give up Blazkowicz. Never give in to these people."
―Caroline's last words in The New Colossus.[src]

Caroline Becker was the late founder and leader of the Kreisau Circle. She was one of the few characters from a previous game who was reimagined and adapted into MachineGames reboot (see Caroline Becker for original universe's history for the character).

Born in 1920, she was raised in the German city of Isenstadt. She was left orphaned, when the Nazis killed her father. The event served to strengthen her hatred for the Nazi oppression, and she created a premier resistance movement in Germany: the Kreisau Circle.

During the war, she was shot through the spine by the notorious Nazi enforcer Hans Grosse. The injury left her paralyzed from the waist down, but her spirit remained unbroken.

Caroline punched Hans Grosse, then after being shot, was raised into the air (she believed she was being pulled into heaven), later blanking out. She remembers later falling back to the ground. She woke up with extreme pain and had to crawl away. She was found three days later in a ditch.

Caroline then spent months in a Kreisau Circle hospital, trying to fight an infection. Between the shot and the fall, she was left with a fractured pelvis and six pulverized vertebrae, forcing her to use a wheelchair.

Caroline Becker returns in Wolfenstein: The New Order.[1] Since the events in Isenstadt she has noticeably aged. She is still an active member of the resistance, despite being confined to a wheelchair. Her mobility issues ended when a set of Da'at Yichud Power Suit was brought back from the Underwater Vault, which has built-in neural-link interface that allows Caroline not only full mobility, but superhuman strength and agility as well, as exhibited when she took down two guard-robots single-handedly.

"Caroline, you copy. 'Fore you go upstairs. Please watch over our people while I get this done."
―B.J.'s thoughts after Caroline's death.[src]

Caroline and the others rescued Blazkowicz from a state of near death following the capture of the Nazi uboat Eva's Hammer. The team prevented the launch of a nuclear warhead, and during BJ's coma assured him that killing Deathshead had dealt a critical blow to the Nazis by crippling their Research Division. Caroline relates that she managed to contact Grace Walker and initiate the Second American Revolution Plan. While six months passed, Caroline took to action and became a primary fighter, going across Paris and retrieving a super soldier body along the way. In addition, she and her contact and friend Juna help in finding resistance members across the United States.

During the Ausmerzer attack, Caroline was shown killing a squad of Nazis before being overwhelmed by a Super Soldier, knocked unconscious, and then taken captive along with BJ and Fergus Reid/Probst Wyatt III by Irene Engel. When Irene's downtrodden daughter, Sigrun, refused to behead Caroline with a fire axe, Irene does it herself, and then puts on a grotesque display of making BJ (and trying to make Sigrun) kiss Caroline's severed head. Afterward, a soldier smashes Caroline's head under his foot, leaving only her body. Fergus/Wyatt, Sigrun and BJ escape, the latter obtaining the discarded Da'at Yichud Power Suit and carrying Caroline's body. Back in Eva's Hammer, a funeral ceremony is held, and her remains are placed inside a torpedo that is launched into the ocean depths.

BJ frequently mentions Caroline, believing her to be watching over him spiritually through his journey, telling her his thoughts and admiring how she'd coped with the uncomfortable Power Suit. He follows her plan to contact resistance members Grace Walker and Horton Boone to aid in the revolution. Caroline saves his life even after death by finding a super soldier body, which BJ later takes on as a replacement for his own post-execution. BJ avenges Caroline's death by killing Irene Engel on the Jimmy Carver Show in California, instigating the Second American Revolution.

She is mentioned in a letter by a Nazi officer in New Paris, stating that the anniversary of her death is approaching and that it is a day of public and official celebration.

Caroline showed herself to be an excellent leader and strategist, being idealized by all members even after her death. Despite being crippled, Caroline stayed focus on ending the Nazi regime and told B.J. that she learned how to fly, implying she has moved passed it. She inspired many to stand against the Nazis, and inspired others to move forward despite adversity. In addition, Caroline deeply resented the Nazis, refusing to give into them before her death, which would have a great effect on B.J. through The New Colossus.

Caroline showed herself to be a skilled pilot and was a skilled marksman presumably before The New Order. In addition, Caroline was an exceptional leader that everyone idolized, as noted by resistance members in The New Colossus after her death. Caroline in The New Order.

Caroline during the reunion with Blazkowicz.

Caroline talking with Blazkowicz while stealing a Project Whisper helicopter.

Caroline in her wheelchair.

Caroline with Fergus, before the final assault on Deathshead's compound. 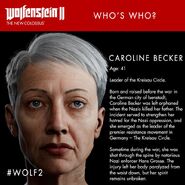 Caroline with B.J. at his surgery.

Caroline speaking to B.J. on the Kreisau Circle rising.

An unconsious Caroline held by a Supersoldat.

Caroline being captured by Irene Engel.

An unconsious Caroline held by a Supersoldat.

Sigrun being forced to commit Caroline's execution by her mother Irene.

Caroline's head has been pulverized.

B.J. carries Caroline's headless body back to the Eva's Hammer much to the grievance of the rest of the Kreisau Circle.

Caroline's picture during her funeral.

Caroline's body laid to rest in the makeshift-coffin torpedo.

The torpedo carrying Caroline's body to rest in peace in the deep of the ocean.

Caroline's journal on what happened after the death of Deathshead.

Caroline's mugshot crossed out on the mission briefing to save Dimitri Fedorov on Venus. 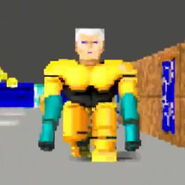 Caroline as the Episode 5 boss in Wolfstone 3D.