This article is about the castle from the 2009 game. For other castles, see Castle (disambiguation).

The Castle (German: Schloss) is an old fortress located on a mountain near the city of Isenstadt. It is visited by the player during the second half of Wolfenstein, and is the second-to-last mission given by the Kreisau Circle with the goal being to rescue Caroline Becker. It is accessed from the Downtown hub. This level featuring a boss fight between the Queen Geist, a new monster that is only fought in this mission. The levels also make the first appearance of Rocket Trooper, which will appear frequently through out the remainder of the game.

The castle is never given a name during the course of the game, simply being called "Castle" by the mission that takes place there. The facility has been taken over and fortified, and is host to all of the most powerful enemy types seen during the campaign. A huge machine has been constructed on the roof to harness the power of the Black Sun Dimension.

There is a total of sixteen Gold, six Intel and two Tomes found in this Level.

Castle View of the Level.

Another View for the Castle.

Inside the Castle, where B.J. Discovering the secret by using Veil. 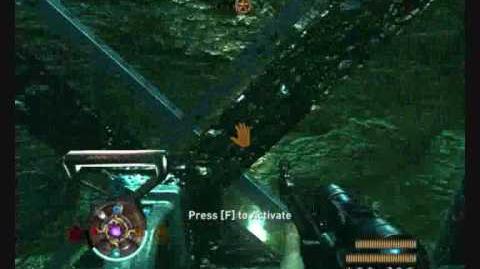