Wolfenstein Wiki
Register
Don't have an account?
Sign In
Advertisement
in: Nazis, Wolfenstein II: The New Colossus, Traitors of Country,
and 7 more

The Diaries of Agent Silent Death

"Guards, this is Charles Lorentz speaking. As you know I have a very important shoot coming up. Now, with the horrible murder of my friend Überkommandant Hans Stiglitz, I want everyone to keep their ears open and eyes peeled alright! For any degenerate terrorist sneaking around on the premises."
―Chuck Lorentz on speaker.[src]

Charles "Chuck" Lorentz is the secondary antagonist of the Wolfenstein II: The New Colossus DLC The Diaries of Agent Silent Death and is Silent Death's second target.

Chuck Lorentz was once an undercover OSA agent but allied with the Nazis and betrayed Jack Valiant. The Nazis rewarded him by promoting him to Head Producer of American Propaganda at Paragon Pictures, a major movie studio in Hollywood prior to the Nazi occupation which post-war had been turned into part of the Reich's propaganda machine. It is assumed that he simultaneously held a high ranking position in the Reich Ministry of Public Enlightenment and Propaganda (Reichsministerium für Volksaufklärung und Propaganda, or RMVP).

During this time Lorentz, was able to start a friendship with general Gerhardt Dunkel, even having him on his talk show - 'Lorentz's late Show' he was also an owner of the Elite Hans toy collection, as he was shown with displaying the Terro- Billy, action figure.

Lorentz is playing the part of Blitzmensch in his next film Blitzmensch Returns: Vengeance for the Aryan Race unknowingly being hunted by Jessica Valiant. Years of working as a Head Producer has made him incredibly cocky, arrogant and utterly egocentric as he sees himself as a legendary actor and treats his soldiers as nothing more than expandable pawns. His egomaniac tendency reaches to the point that he promises to reward any soldiers who succeeded in protecting his life, a name in the annals of Reich history. Consequently, he is well-disliked by almost everyone working in the Paragon studio and some soldiers badmouth him behind his back, and this had effectively caused a lapse in security, making it easier for Valiant to infiltrate the studio.

Silent Death located Lorentz in his office practicing his role as Blitzmensch with his bodyguard/assistant, Sebastian based on the movie script written by Irene's eldest son, Adalwardus, He is shown to clearly hate the script but tries to pretend that he likes since he doesn't want to incur Irene's wrath. Valiant killed both Lorentz, and Sebastian and escaped the building by the window, in his office. 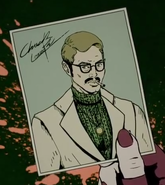