Civilians are people who are not armed. They are mostly women. When the player kill a civilian, the mission will fail. They only appear in Wulfburg village and Paderborn village. Sometimes there are special NPCs, such as Kessler, that the OSA will not allow the player to harm under any circumstances. In order not to accidentally shoot the civilians, its best to avoid the room they are in. Being detected by them may cause the enemies to be alerted to the presence. In Tides Of War version of console-exclusive Cursed Sands campaign, Blazkowicz can spot some civilians in Ras el-Hadid.

Woman in her underwear in scope zooming. 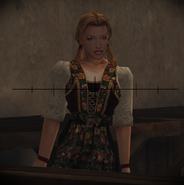 Waitress in the cafe in Wulfburg Village.

Waitress in the cafe in Wulfburg Village.