Return to Castle Wolfenstein,
Enemy Territory
The M1911A1 Colt has been the standard sidearm of the United States military throughout the 20th century. Designed by famous small arms designer John Browning. It was replaced by the Beretta 92 in the 1980s, but some elite branches of the military (such as the Marines' Force Recon) prefer it over the Beretta 92. It has also gained a strong following among civilian shooters. 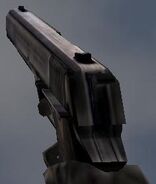