Wolfenstein Wiki
Register
Don't have an account?
Sign In
Advertisement
in: The New Order enemies, Nazi Soldier, The Old Blood enemies,
and 14 more

"Like they taught us back in boot camp. Take out the commanders first."
―B.J. inside the Ausmerzer.[src]

Commanders (German: Kommandant) are officers of the Nazi military that B. J. Blazkowicz encounters throughout his adventures in Wolfenstein: The Old Blood, The New Order and its sequel The New Colossus.

Commanders are easily spotted thanks to their peaked cap, lack of protective gear, the formality of their uniform and the radio chatter emanating from their glowing red headset which they use to summon reinforcements in the event of a shootout. They commonly serve as coordinating officers of other units on the field rather than actual fighters, and as a result tend to hang back and let their subordinates take care of the player instead of actually fighting. Their only line of defense is a handgun.

The presence of Commanders often means a stealth section is right up ahead where their (preferably silent) elimination is key to avoiding a drawn-out firefight. As they don't have a lot of health, a single Throwing Knife, Throwing Hatchet, or suppressed Handgun shot is usually enough. There are only a few times where the player will have to deal with Commander that is alarmed, an example being the ending of Section F after destroying the signal.

Unlike regular Soldiers, if a Commander detects the player, all of the other officers in the area will sound an alarm, though he can be silenced before he can do so if one reacts quick enough. Commanders are usually found working in pairs.

Commanders stationed in America in 1961 have several notable differences from previous Commanders. They have a parade uniform cord and a Feldgendarmerie (Field Military Police) shield on their chests. Their headset also lacks a red light and they wear a padded black duster. Atom Commanders wear a yellow hazmat suit beneath their dusters and a gas mask beneath their peaked cap. Venus Commanders have uniforms similiar to the ones of Atom Commanders, but colored in orange instead of yellow. The Diaries of Agent Silent Death introduces Moon Commanders, who have the same uniforms as Atom and Venus Commanders, but colored white.

The Nazi commanders in General Deathshead's regiment are pencil pushers with a sadistic streak. They would rather avoid getting in the line of fire, but are forced into action in order to get a promotion from their general. The radio headset attached to their peaked caps allows them to call for backup. The best way to deal with commanders is to take them out silently, before they sound the alarm.

The 1946 variant is only encountered in The Old Blood and the prologue level of The New Order before being replaced by their 1960 counterparts.

Even though their combat skills may be limited, Nazi commanders are essential for coordinating tactical reinforcements. Through their communication headset, they can radio for reinforcements, and will continue to do so until they're dead.

Commander 1960s are encountered throughout the game after the completion of the prologue.

Commanders in the Nazi Air Force are often cowardly paper-pushers who got promoted because they had the right connections. They carry hand guns and try to stay behind the other soldiers as much as they can. The radio headset attached to their peaked caps allow them to call for backup. Just like normal commanders, the best way to deal with Air Force commanders is to take them out silently, before they sound the alarm.

Air Force Commanders are rare finds in the campaign. Only four of them are encountered throughout The New Order: at the end of the first London Nautica level, and at the start of the revisit, a few minutes before fighting against the London Monitor.

U-boat captains of the Reich are tough-as-nails war veterans who would rather go down with their ship than surrender to the enemy. U-boat captains, during their training, are sent up to the lunar base to be taught the code for their vessel's nuclear shells, and then they memorize this code to prevent hostiles from taking control of those warheads. Only one captain is fought in the game, and despite his headset, he does not use it.

The Captain is encountered at the end of the U-boat level.

This variant of the commander is seen on the Lunar Base, and nowhere else. They use the unique Lunar handgun, which has a permanently attached silencer.

They are commanders of the internal security forces of Germany. Unlike other commanders, they are more relaxed and easily dealt with. If they find the enemy, they ready a nightstick but act rather glitchy and cannot call reinforcements. They wear an uniform the same as Bubi's, but with an officer cap.

Commanders in different uniform. The two on the far right are the Chief of science, and the Lunar commander variant, which uses a silenced pistol. 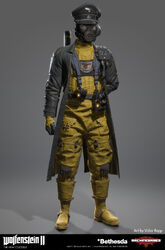 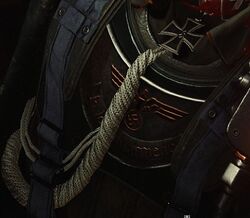 Detail on the parade cord and Feldgendarmerie Gorget

A commander in The Old Blood (on the right).

B.J. killing a Commander with a throwing knife in Wulfburg.