The Nazi Commanders make a returning appearance in Wolfenstein: Youngblood. These experienced officers of the Schutzstaffel are now equipped with substantial upgrades compared to their 1960s counterparts.

They are three types of Commander variant in the game.

Kommandant in 1980 dresses in several different variants of uniform. They can summon troops to the battlefield when alerted by broadcasting via radio frequency. They are equipped with the Pistole or Maschinenpistole.

The KampfKommandant dresses in a black uniform similarly to their 1960s counterparts, but are now equipped with a pair of tactical goggles and heavier body armor, and looks similar to an Uberkommandant. They can summon reinforcements like a Kommandant, but wield a stronger weapon like the Elektrokraftwerk or the Sturmgewehr. 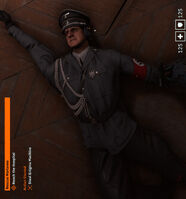 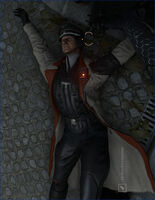 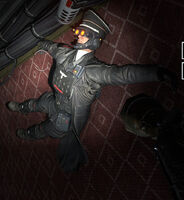 The first Commander to kill in Youngblood.
Community content is available under CC-BY-SA unless otherwise noted.
Advertisement