Chain gun and Rocket Launcher
Episode Six of Wolfenstein 3D, titled Confrontation, is the final in the Nocturnal Missions trilogy of episodes which was initially sold separately from the game's first three episodes, later fully integrated into the game.

The Nocturnal Missions depict B.J. Blazkowicz's struggle to end the German chemical warfare campaign. In previous episodes, B.J. Blazkowicz killed the scientist behind the creation of the chemicals, and found the plans for the attack. Now, he seeks the general who would put the plans into action, in Castle Heidenheim[1] (or Offenbach[2], contradicting information is given). He fights through nine (or ten) floors before coming across General Fettgesicht (General Fatface), killing him and preventing the Giftkrieg from ever beginning. 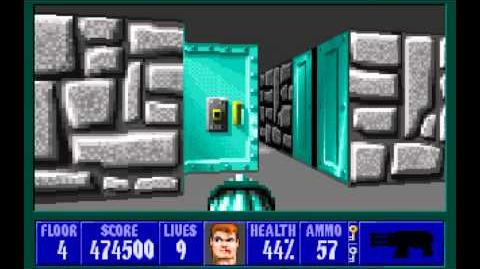