Drones (German: Drohne) are aerial robots used by the Nazis in the 1940s, 1960s and 1980s. They have appeared in all of MachineGames entries with different designs and attacks.

The WESPE drone is an unmanned combat aircraft controlled by a basic AI unit. It was developed in the late 40s by Dr. Ludwig Wald, one of Germania's top radio engineers, as a way to efficiently survey large areas of Nazi-controlled cities from above without requiring a human component. Since then, it has been enhanced with numerous abilities, such as power-efficient laser cannons and ramjet engines.

By 1960 a handful of Drones, presumably modified to operate above the lunar surface, had been deployed to guard the exterior of the Nazi moon base.

Despite its bulkier new design, the drone is still quite weak, since B.J. can kill it with a few shots from a Maschinenpistole or a single shot from a Hammergewehr. However, it is still dangerous since its weapon has been upgraded to fire a concentrated laser beam similiar to the Lasergewehr. In fact, the drone appears to actually be an older 1950's model than the 1960 drone version. This is probably because of the fact that German forces in the 'American Colonies' have a relatively lower priority with regards as to most new equipment (the ÜberSoldat being one of the notable exceptions to this). This was in turn due in part to the ongoing war in Africa, but also because (ironically as it turns out) America in general was considered to having been successfully 'pacified'.

The Drones also act as surveillance around areas, going on alert if they spot an enemy. Similar to the Laserhund, once destroyed, they land and cause an explosion that can injure the player; sometimes even knocking them backward.

The drone returns in 1980s Neu-Paris. While they resemble their American models, some of these drones have been equipped with grenade launchers in lieu of laser weaponry. 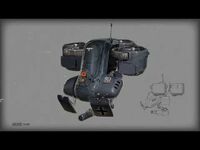 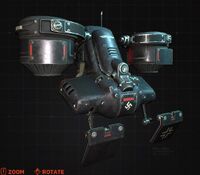 Drohne in Youngblood.
Add a photo to this gallery
Retrieved from "https://wolfenstein.fandom.com/wiki/Drone?oldid=64199"
Community content is available under CC-BY-SA unless otherwise noted.