Dynamite is a timed explosive weapon in Return to Castle Wolfenstein. In single player, the player can set the fuse by holding down the "fire" button from five seconds up to a maximum of 45. After the desired time is set, the player plants the bundle of deadly sticks. It can kill enemies, demolish objects and even buildings.

Timing is vital if you are planning to use dynamite as an offensive weapon, the enemy cannot kick this back at you, so this time they will simply run away if they see a bundle thrown at them. But if they are charging at you, like many enemies will, putting this on their path will guarantee a lethal result, the damage radius is not large (although the radius is a little larger than the american grenades), but if the bundle blows up near a target, you can achieve kills (It deals an approximate of 750 of damage, meaning that 2 well-placed dynamites can kill a Super soldier). If timed well, it will cause devastating damage to slow-moving, boss type enemies like Proto-Soldiers, a well-placed dynamite can kill them, but if not, with some strikes from other weapons like FG 42 or Sten will finish the job.

Dynamite is first found at the end of the Village behind the tomb in Dark Secret mission.

In Multiplayer mode and Wolfenstein: Enemy Territory, Dynamite is deployed by Engineers and is initially inactive. Once armed (with the use of the Engineer's Pliers), the timer starts ticking - it is always set to 30 seconds. Armed dynamite is surrounded by a pulsating red glow. Dynamite is the only means of destroying certain mission objectives. The enemy team can defuse the dynamite, so the attacker need to defend the armed dynamite until it is about to go off. 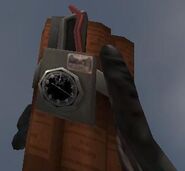 First person view
Add a photo to this gallery
Retrieved from "https://wolfenstein.fandom.com/wiki/Dynamite?oldid=62581"
Community content is available under CC-BY-SA unless otherwise noted.