"The Elektrokraftwerk fires multiple areas of electricity that automictically target nearby enemies. The Electrokraftwerk can also be used to open doors and crates with super secure electronic locks."
―Description from the tutorial.[src]

The Elektrokraftwerk (lit. "Electric Power Plant") is powerful Tesla-based gun featured in Wolfenstein: Youngblood. The gun fires multiple electric arcs that can hit more than one opponent at once and disable robots rapidly.

The Elektrokraftwerk can be collected in Brother 3, being in the torture labs on one of the levels. The weapon is mainly used to open doors that have electric locks above them, making sure that no one can enter an area, or room.

Pick up for the Elektrokraftwerk.

Obtaining and inspecting the Elektrokraftwerk.

One of the twins readying the Elektrokraftwerk to fight a Super Soldier. 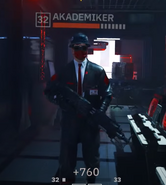 A scientist wielding an example of the weapon