Elite Guard has other meanings. See Elite Guard (disambiguation) for other uses.

The Elite Guards (German: Elitewachen) are special SS squads consisting entirely of women. Trained by Helga von Bulow, the Elite Guards are fanatically loyal to Bulow and are rumoured to be a part of a witches' coven. The Elite Guards are first encountered in level The Defiled Church, and in final parts of the game. They also make an appearance in console-exclusive Cursed Sands campaign. These women are ruthless and efficient killers.

It is unclear what, if any ranks exist within the Elite Guard squad. They are regularly seen giving orders to regular soldiers so their overall status appears equal to that of officers or NCOs. Initially they take orders directly from Helga. After her death, they are under the command of Marianna Blavatsky and it is unclear who commands after her.

The Elite Guards are primarily armed with Sten Submachine Guns or suppressed Lugers. They can sometimes carry MP40s. If you encounter the sniper variant of the Elite Guard, they will be armed with Mauser rifles; despite it having no scope, they still can hit you at very long distances with amazing accuracy even before you see them, plus with the fog that is blurring your vision, it just makes spotting them much more difficult.

Elite Guards wear a tight, black leather uniform and high-heeled boots. In Chateau Schufstaffel and areas behind it, they will wear two piece leather uniforms that leave their midriffs exposed. Some of them also wear a black beret on their heads along with black shades. Many wear chokers bearing iron cross pendants.

In Castle Wolfenstein, Elite Guards are seen already visibly battered and wounded due to their hard-pressed fight to maintain control of the castle as the undead threaten to overrun it.

Elite Guard Type 4 without a Beret and Shades.

Elite Guards in The Defiled Church.

Elite Guards with MG 42 and Suppressed Luger in Unhallowed Ground. 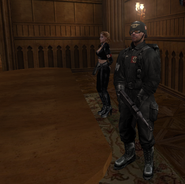