Episode 1, Floor 5 is the fifth level of Wolfenstein 3D episode "Escape from Wolfenstein". It is the biggest map in Episode 1, but one third of this floor is composed by one giant secret area near the exit.

Exit your starting room and, in the new room with the red island in the middle, open the door on the far right. You'll now enter a wooden area; to get to the gold key, follow this sequence of doors to open: right, left, left, right. Be careful, there will be several enemies on your way to the key.

Like most the floors in Episode 1, there are lots of side areas that can be a problem if you want to get 100% kills, treasure and secrets.

1. In the room with the red island, face the door leading to the white stone area, turn right and press on the wall to discover dinners, ammo clips and the chaingun (this secret is useful if you're starting this mission from scratch).

2. Face the door leading to the room which contains the gold key, then turn right and press on the Hitler's picture. This secret contains some treasure.

-Open the door mentioned in secret n.1, then face the three doors in front of you and open the door to your far right. Turn left and open one of the two doors in the hallway, then turn right and press on the wall in the middle.

Your reward consists in ammo clips and dinners.

4. Open the door in the room with the green barrels, then the one to your left. Your fourth secret is on the left hand wall and it's got lots of ammunitions.

5. As mentioned above, the final secret of the level is extremely large. Once you've entered the room beyond the gold door, immediately turn left, press on the wall and open the door in the secret room. Kill the guards in the hallway, then open one of the three doors in this hallway. The room beyond contains several enemies, so kill them all as best as you can. Also in this room are 8 rooms which are accessed through gold doors and which contain several goodies and baddies. Be careful, some of the enemies in the large room can open the gold doors and hide behind them! 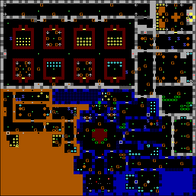 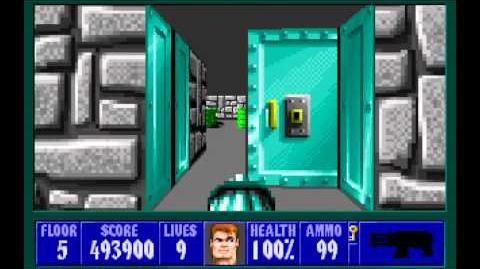