< Episode 1
Edit
watch 02:52
Roblox: DeepWoken - The Loop
Do you like this video?
Play Sound

Episode 1, Floor 9 is the last level of Episode 1 of Wolfenstein 3D. The level takes the shape of a grandiose hall built in bright red brick, with white columns that give way to grey stone supports. There are no conventional enemies, and no treasure (save for one One Up). There is only the boss, Hans Grösse, who you will have to kill to escape Castle Wolfenstein.

This level was famously recreated in Doom II: Hell on Earth for the secret level MAP32: Grosse, with a Cyberdemon standing in for Hans Grosse himself.

Hans Grösse wields dual chain guns. He is not particularly fast, with only the speed of a Guard. He has around 40 times the health, though, making him very much of a threat.

On low difficulty he is no problem. If you have full health and a chain gun of your own, you can quite literally stand directly in front of him and shoot, and he will die with negligible effort. On higher difficulties, however, he poses a serious threat. The first step is to open the one Secret available to you (the swastika in the middle of the left wall, see the map) and stock up on Health and ammunition. Even if you're full it's in your best interest to have the Secret already open, as you will probably need to retreat at least once to resupply.

Open Hans's door, and immediately retreat while firing at him. As soon as possible, take cover behind one of the grey brick walls on the left, and shoot. He enters a firing stance for a split second before actually shooting- when he does, retreat behind the wall (Strafing is useful). Once he is done, come back out and continue your assault. Rush into the Secret whenever you need health or ammunition, and rush back out. Before long, Hans Grösse will be no more, gone the way of his brother and sister.

Hans Grösse drops a gold key. Use this to open the door in the room you found him in (but not before opening the second and final secret on the flag on your left. Again, check your map). Rush toward the outside, and escape.


You run out of the castle and hook up with the Underground. They inform you that the rumors were true: some hideous human experiments were seen around Castle Hollehammer. So Operation Eisenfaust is real!
You must journey there and terminate the maniacal Dr. Schabbs before his undead army marches against humanity!
MORE WOLFENSTEIN
And in episode three, Hitler resides in his titanic bunker as the Third Reich crumbles about him. It is your job to assassinate him, ending his mad reign.


And if you like Wolfenstein, you'll love the prequel trilogy of Nocturnal Missions! Thirty more action-packed, super-challenging levels! 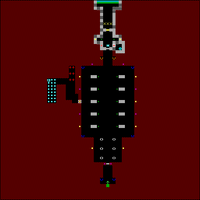 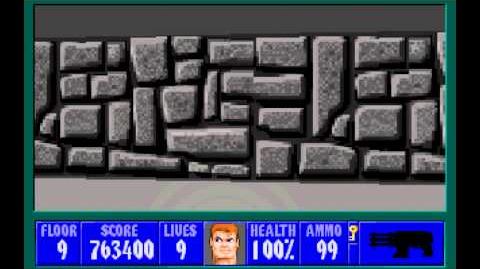