Episode 2, Floor 10 is the secret level of Wolfenstein 3D episode "Operation: Eisenfaust". It is accessed from Floor 1 and exits to floor 2. The level is quite big and has a surprisingly large number of mutants, but most of it is composed by secret areas.

Judging from the blue walls everywhere, the weird blue-azure ceiling and the music, this map seems to be something like secret underground dungeon (and in fact in a room in the south-western side of the level there are several cages). This floor is also notable for the extremely long winding passage way on the north side of the map which is filled with crosses.

Since about 90% of the entire map is composed by secret areas, it is pretty easy to finish it under half a minute: you just have to exit the starting room, kill the mutants on both sides of the new room, find another door and kill the final bunch of mutants. On the other hand, this map can be kinda tricky if you want to get 100% of everything: as said above, there is a very large count of mutants, and even if they're usually not placed in traps, they can be deadly. Nontheless, the player will find a sizable number of health items.

For a detailed walkthrough, read the section about the secrets.

1-4. On the northern, southern, western and eastern side of the first room you enter is a secret.

5. The northern secret is blocked by another secret wall.

6. As you press on the eastern secret wall you'll see ammo clips. Behind them is another secret, with some crowns in it.

7. Push the southern secret wall. Walk down the hallway behind it until you come across two doors: open the left one. Kill a handful of guards and open any of the two doors in their room. In this new room are two tables: on the left of the left table is another secret, leading to crown and ammunitions.

8. Press on the western wall and open the door on your left. Follow a hallway with blood, giblets and dead guards until you find two doors, both leading to a room with several mutants and med kits. Push a wall behind a med kit to reveal ammo clips, a chaingun and two one ups.

9-10. Go back to the start of the western part of the map and open the other door. Kill all the mutants and find the only door in their room. Walk down the LONG hallway of crosses until you get to a room full of crosses guarded by some SS. Behind them is a pair of secrets that lead to the northern side of the map.

This level is one of three levels (the others being Episode 1/Floor 10 and Episode 2/Floor 9) in which killing a non-boss enemy has a one in 256 chance of producing a fart sound instead of the regular death sound.[1][2] 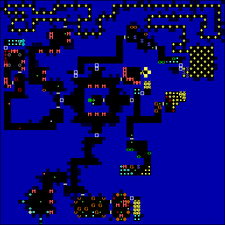 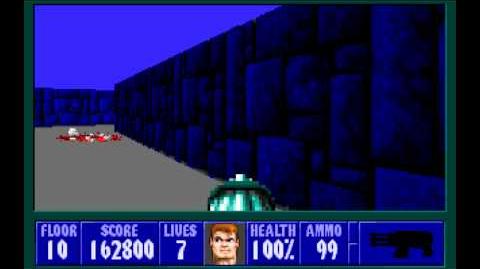