The level doesn't present a high count of mutants, but most of them are the first enemies you'll come across, therefore, if you're starting this map from scratch, you may have some difficulty in killing the mutants only with your pistol. This, combined with the fact that the count of health items is very poor (expecially towards the start), makes this mission quite hostile. This map is also the first one in the game that features a mandatory secret.

As said above, you're awaited by some mutants just after the start. Go straightforward from you starting door and open the door between wooden walls. The room beyond is empty, but there is a mandatory secret across from the door. Opening the door in front of you will take you to a chain of rooms with guards and SS. Once you've entered this red bricks area, open the door in front of you, then the one to your left, then the only ones in the rooms beyond and you'll eventually find the gold key.

Go back to the start of the red area, exit it and open the other door. Two rooms beyond you'll enter a large blue area. Go straightforward and open one of the three doors you'll come to. Continue forward until you come to a fork; you can take either path, on both sides you'll find an alcove leading to a long corridor. This will take you to the gold door. Open it, kill the final pair of enemies and exit the mission.

1. This is the mandatory secret mentioned above.

2. To the left of the door leading to the red bricks area is your second secret.

3. Once you've entered the blue area, turn right to come to an area with three corridors. Take the left one and, towards its end, press on your right hand wall.

4. This is across from the gold door. 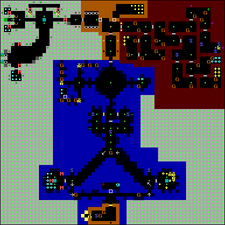 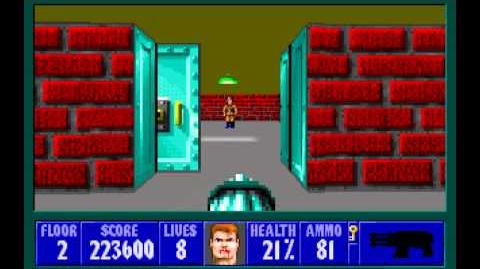