Episode 2, Floor 3 is the third level of Wolfenstein 3D episode "Operation: Eisenfaust". With a very low count of mutants (compared to the previous floors) and a high count of empty rooms/hallways, this floor can be definitely considered to be a breather from the tough starting maps of Episode 2. It is symmetrical until three rooms beyond the gold doors.

A curiosity about this mission is the first appearence of a silver key: you need it to finish the level, as well as the gold one.

You can take either left or right path when you start, open the door you'll eventually come to. Kill all the guards, then open the door leading to a small hallway with two unmarked doors: open the one on your right, the, the one between two wooden walls and grab the gold key.

Go back to the area with the now dead guards and open the other door. You can't open the door in front of you: it's a silver door (the first one in the game). Open the gold door on your right, cross an empty hallway and, when you come to a room with two doors, open the one to the right. Traverse another empty hallway and open one of the two door at its end. The silver key is at the end of the new hallway, but mutants hide inside the alcoves on both sides of the corridor: don't run towards the key, first kill those mutants!

Backtrack to the silver door, open it and in the new room is the exit door.

1. Face the door leading to the gold key, turn around and press on a wall to find three med kits.

9. Open the silver door and across from it is your final secret: lots of ammo clips before you finish the level. 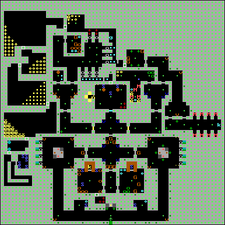 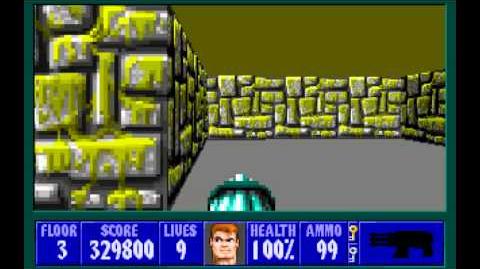