Episode 2, Floor 4 is the fourth level of Wolfenstein 3D episode "Operation: Eisenfaust". It is notable for having the highest mutants count of the episode.

You'll be immediately in front of a mutant that will charge against you from a straight and narrow passage way. When you kill him, more mutants in the area beyond will be alerted to your presence and will all come for you. If you're starting this map from scratch, find a good weapon before you have to face this handful of mutants.

Go through the narrow corridor and explore the bottom side of the area which the mutants came from to find the gold key.

From the start, follow the right path and you'll come to an area with six doors. Open the second or the third door of the left row of doors and, after a small hallway, you'll come to a white stone area. Open the door to enter a large room with six doors (three on both sides) and the silver key at the bottom. The key is guarded by one guard, but when you'll shoot him, the doors in the room will open and many mutants will pour through them.

Go back to the start and this time take the left path. You'll come to another area with six doors. This time open the third door of the right row and you'll find the silver door. Cross the small wooden hallway, kill the SS and open the gold door. Turn left, be careful of a little trap and exit.

Apart from the start and the area with the silver key, the map is not that hard. However it can become a serious problem if you want to get 100% of everything: there are lots of mutants, lots of secrets and you can get lost pretty easily.

1-2. At the start, turn immediately right and press on the wall. Traverse an empty hallway and open the door at its bottom. Kill the mutants in the new room, then press on a wall to the right of the door to reveal four med kits.

3-4. At the start, this time turn left and open the door. To the right of the ammo clip is a secret wall that leads to a massive secret area. Once you've come into a room with a metal island in the center, find two doors (one in front of you and one to your left). Open the door in front of you and press on the wall to the right of the three ammo clips to reveal some more.

5. The room with the gold key has a large island in the center. Behind two piles of bones is a secret that contains 2 med kits and 5 ammo clips.

6. Follow the right path from the start and, once you've reached the area with 6 doors, open the first door on the right side and press on the right hand wall to reveal a large room full of treasure.

7. Most the rooms housing mutants in the silver key trap are empty, but one of them contains a secret with health, ammo and a chaingun. 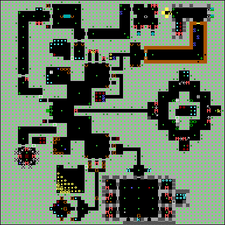 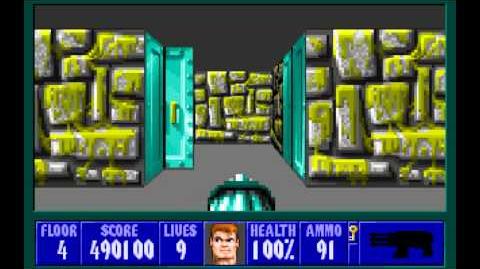