The level is notable for its initial appearance as very small- there are only three rooms and a hallway that can be explored before finding the elevator. Reflecting this, it ties with Episode 4, Floor 4 for the shortest Par time - one minute. In fact the exit of this level can be achieved in even less time than Episode 4 Floor 4 and, enemy/door tricks (present in some other floors) aside, faster than any other normal level in the game. A Secret[secret 1] may be found in the elevator room, however, which leads to a much larger area. This area appears to be somewhat decrepit, as the clean stone walls of the original 3 rooms become quickly moss-covered. It is not unpopulated, however, as Guards, SS, and Mutants stand and Patrol in the vicinity.

Eventually, in the westernmost portion of the level, one may come upon an unusual feature - a hidden purple stone room full of Mutants, with already-dead Guards littering the floor as well as the hallway outside. Only very rarely are Guards placed in a map already dead, the implication here seeming to be that the Mutants have attacked and killed them. But some mutants in another room in the east side did not kill the SS. Why? Come on, the mutant is a killing-machine.

There are only two Secrets in the level: 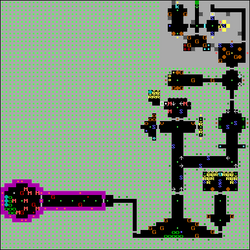 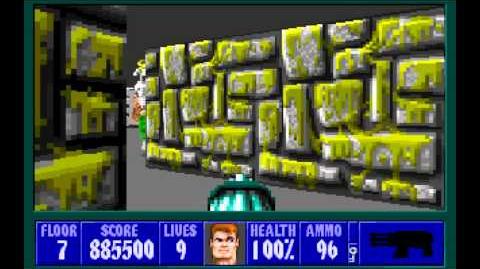