The level is very well known for the infamous Aardwolf maze inside.

This level starts out with a central hub-like area where the player can decide which direction to go. The areas are as follows:

To start the level off, do a 180 degrees spin and go down the hallway you're facing (go around the start island.) Killing the Guard(s) inside will alert Mutants and SS inside the next door. There are First Aids inside the Mutant / SS room. This area is actually avoidable.

Get out of the area and turn left. There are three doors. The two doors on the left are technically connected, housing Guards and some Mutants. The third door has three doors inside - the door on the furthest right houses 1 - 3 SS and a secret housing 4 First Aids. The other two doors lead to a room with (to the right) has 1 - 3 Guards who WILL be alerted with you see them. Killing them will alert SS in two rooms. Kill the SS coming for you and in the right door is a Silver key. In the room to the left is some health and 2 Crowns. Next to the right door are two Gold doors (doors needing the GOLD key), so be wary of that.

Go to the wooden area now. Clear out any Guard hostilities, enter the Silver door and kill more Guards. Entering the NEXT room you'll find the Gold key protected by a swarm of SS. Exit the area and open the door in front of the Silver door. There is a solitary Guard guarding a lot of ammuniton. From this door, turn left and find a mini hallway with a door. Clear out the enemies in the hallway. In one of the rooms are some Guards and SS, with some health and several Crowns. From this door, turn right and on the wall is a Secret with the Chaingun. To the right from that Secret is another Secret with a LOT of Treasure. The rest of the doors in this area are avoidable though are detailed. There is one item in the rest of the doors - 1 First Aid.

Go down the final hallway and open up the Gold door. There are some Guards and SS inside, so dispatch of them quickly. Starting at I Am Death Incarnate! there is an SS in the elevator. Beware!

If you decide to go to the other two Gold doors, there are 2 - 6 Mutants inside with some health.

This maze is not a maze to run around (a little bit at the end, yes), but a maze of secret pushwalls. Most lead to dead ends or inaccessible Treasure items (1-Ups and Crosses.) Some paths take you to accessible 1-Ups, though. Inside the maze, also, are 2 Hans Grosses. They are in different areas (thank goodness!), but this is harder than the Episode 1/Floor 9 battle, as the area is WAY smaller and while backing away, you can bump into a wall, giving Hans a chance to kill you. In each of the Hans Grosses' rooms are nothing.

The reason of the Aardwolf Maze is to find the famous Aardwolf Sign. In some versions of Wolfenstein 3D, the Sign is not there as cheat sites allowed players to find the maze and the Sign with minimal effort, putting a stop to a contest id Software were holding. If players have the 1992 release, the Sign is seen. If from late 1992 to later, the Sign is replaced by a pile of skeletons next to an accessible 1-Up.

To find your way without being lost, search for a map showing the REAL way. 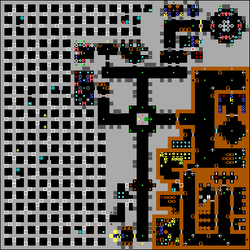 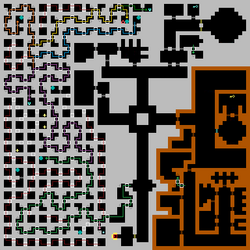 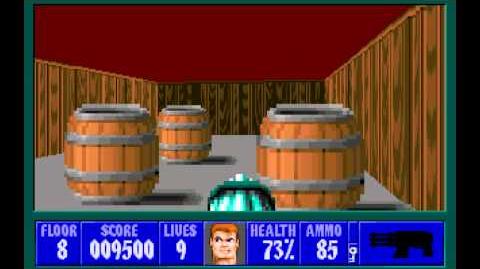