Episode Two, Floor 9 is the last level of Episode 2 of Wolfenstein 3D. The level is the lair of the mad scientist and episode boss Dr. Schabbs. He must be killed to put an end to Operation Eisenfaust and complete Episode 2.

Reflecting Dr. Schabbs' nature, its walls are totally covered in shining metal, and the level exhibits precise, surgical symmetry in its design. The actual room in which Schabbs resides contains several Mutants, and appears to open up on the sides to a starry night. The doctor himself stands behind a column, so will not detect the player until the player moves too far to either side. As a result, his room can be cleared without alerting him.

There are no enemies outside of Schabbs's room, so refer to the map and open the two secrets in advance so they will be available to you. One contains Food and Health kits, the other contains an arsenal of ammunition and a Chaingun, which is a godsend if the player doesn't already have one. The secret on the right has two pushwall entrances - it is beneficial to take the one in the bottom right of the room, as a third pushwall is included, the intention being, it seems, that BJ can use the second pushwall to close the door. Locking himself in temporarily so he can recover, he can escape through the second pushwall entrance.

Once you're ready, open Schabbs' room door. 2-8 Mutants occupy this room, and will attack on sight. Wait for them to exit the room, then kill them. To run inside is certain death on higher difficulty, especially if you awaken Schabbs in doing so. Restock from the secrets (one can open both secrets in this room without alarming the Doctor if he is careful), then step into the enemy's sight.

Schabbs announces his presence with a booming, maniacal laugh. At highest difficulty, Schabbs has more health than any boss in Wolfenstein 3D or Spear of Destiny, more so even than the combined forms of Adolf Hitler. He attacks by throwing syringes which damage heavily. Even if you manage to dodge all his syringe attacks, which is unlikely, you will probably have to restock on ammunition. There is a small bit of Ammo on the floor of the room, as well as Health kits, but it is recommended to retreat to the ammo cache secret for supplies.

The episode ends as soon as the resilient Schabbs is no more. Before death, he cries "Mein Gott in Himmel!". In English: "My God in Heaven!". A Deathcam plays of his demise for your entertainment.


You stand over Schabbs' fat, evil, swollen putrid body, glad your mission is finally over. All his journals and equipment will be destroyed. Humanity is safe from his hordes of hideous mutants.
Yet the Nazi atrocities continue: thousands march into death camps even as the Nazi war machine falls to its knees. There is only one way to stop the madness. . . .
MISSION: TERMINATE HITLER
In episode three, Hitler hides in his titanic bunker as the Third Reich crumbles about him. It is your job to assassinate him, ending his mad reign. You find he has escaped to the Reichstag, and there you must confront him.


And if you like Wolfenstein, you'll love the prequel trilogy of "Nocturnal missions"! Thirty more action-packed, super-challenging levels!

This level is one of three levels (the others being Episode 1/Floor 10 and Episode 2/Floor 10) in which killing a non-boss enemy has a one in 256 chance of producing a fart sound instead of the regular death sound.[1][2] 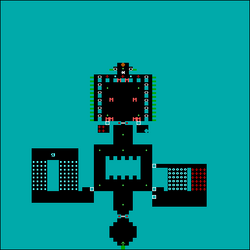 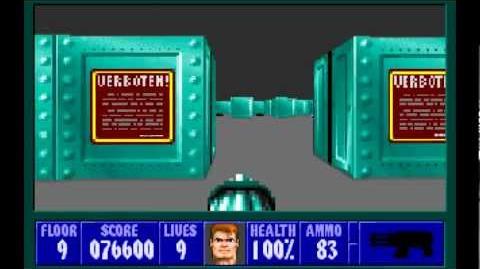