< Episode 3
Edit
watch 02:52
Roblox: DeepWoken - The Loop
Do you like this video?
Play Sound

Episode Three, Floor 1 is the first level of Episode 3 of Wolfenstein 3D. The level is filled with Guards and SS, many of whom can be found Patrolling the area. Notably, the level also features the first Officer to be found in the game.

The level takes the form of a generic set of official halls, but behind a set of Secrets can be found a hidden jail area full of skeletons, some of which are still bloody.

Find the jail area as soon as possible - it's the blue area on the map. There's a Machine Gun, food, as well as an ever-useful One Up.

1) Push the gray stone brick wall with red Nazi flag in the room with four green drums to get Ammo, Treasures and First aid kit.

2) As soon as you entered the Secret No.1, push the wall just to the left of the one pushed by you. In this blue jail area, there are Food, Treasures, Ammo on one side and a Machine Gun, Ammo on the other side.

3) Push the plain blue brick near the one side with Food, Treasures and Ammo above mentioned to get Ammo.

5) Push the gray stone brick on the far right side of the elevator to get Treasures and Ammo. 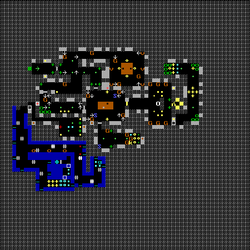 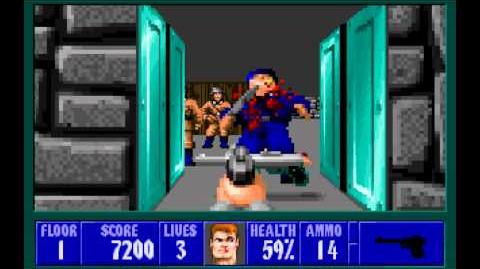