Episode 3, Floor 6 is the sixth level of Wolfenstein 3D episode "Die, Fuhrer, Die!". It is definitely a step up in difficulty and size from the previous maps of Episode 3.

Next to your starting door is a gold door: if you want the gold key, you have to navigate a large maze (which is on the northern side of the level). However, you don't have to open the gold door, since inside are only treasure items and an extra-life.

At the start, open the door in front of you to enter a hallway with many officers behind posts. You can either kill them right now (though it's difficult) or reach their room through secret n.1 and kill them from that spot.

Go back through the door and open the silver one. From this spot, continue forward until you reach the end.

2-3. This time open the door to your left. Again, the secret is behind the med kits. Open the door behind and collect the treasure items. Behind a crown is another secret that will lead you in the room with the silver key (yes, it's possible to grab this key without fighting). 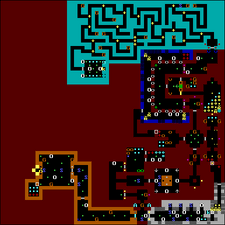 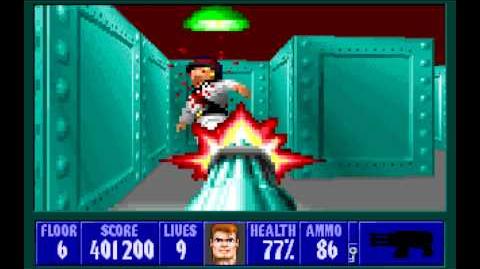