< Episode 3
Edit
watch 02:52
Roblox: DeepWoken - The Loop
Do you like this video?
Play Sound

Episode 3, Floor 7 is the seventh level of Wolfenstein 3D episode "Die, Fuhrer, Die!". The level contains the third secret exit. Beating it with the normal exit is short and straighforward, but a very nasty maze protects the secret exit. The map also contains the initials of John Romero and Tom Hall, one set on each exit path. Only a gold key exists in this level and you only need it for the regular exit.

Regular exit: Go through the squiggly hallway in the second room and one of the doors in the interior has the gold key. Head back towards the starting room but turn right to enter the other door. Don't go straight from here; turn left immediately behind this door and enter the door you see there. The path is straightforward from this point.

Secret exit: You do not need to make the detour to get the gold key. Go straight instead of turning left in the first room beyond the spiralin hallways. When you reach a room with SS and many doors, take the last one on the right. Push a secret on the left in this small hallways. When you eventually find a one-up, look for another secret next to it, but DO NOT push from west to east; only search from the north or south. Otherwise you will jam this secret. Beyond the crosses and SS, there is a silver door. There is no silver key in the level. Push on the same wall as the door to find a bypass route. From there you are on to the massive maze so use the map as a guide. When you find the opening with treasures, ammo, and a one up, the last secret leading to the secret elevator is in that section on a wall near where you entered it from.

In the latest patch of the game (new colossus), there are two more walls for pushing added, for 100% completion. They are located at the very end of the "J" letter, formed by the labyrinth, directly above the location of the most western secret (white square) of the map below. (when ingame, look for the only wall poster at the end of the "J" letter) 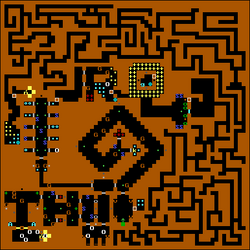 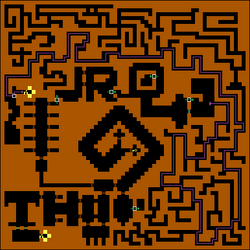 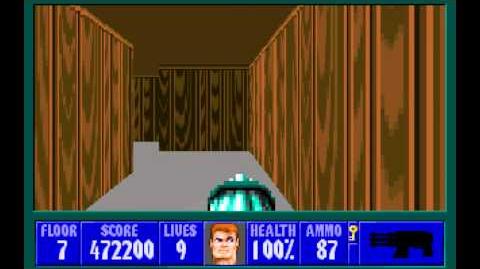