< Episode 3
Edit
watch 02:53
GTA: The Criminal Enterprises - The Loop
Do you like this video?
Play Sound

In order to exit your starting chamber, you have to press on a mandatory secret wall. The starting room exits to a swastika-shaped hallway, with enemies and a door in each of the "arms". A shot will alert all the enemies. Both the keys are mandatory to finish the level: the silver one is in a room accessed through a door in the western arm (it's guarded by officers). Obtaining the gold key is a longer process: open the door in the northern arm of the swastika. In the new room, open the door in front of you, then pass through two empty rooms. You'll now enter a maze-like area. Carefully kill the guards and manage your way to a pair of doors, both leading to a room with officers and two doors. Opening the one on your right you'll come to a hallway with many doors. In one of them is the gold key (and this one is guarded too). Grab it, come back to the previous room and open the other door. You'll eventually come to four gold doors. Open one of them and kill the enemies inside. The final part of the map is rather difficult. Open one of the doors in the room behind the gold doors: you'll see a long hallway with lots of barrels and two silver doors in the bottom. When you open them, you'll alert several enemies, and the barrels will prevent you from retreating back fast. This is the final trap of the floor: you're free to continue your journey towards the showdown with Adolf Hitler.

1. The first secret is mandatory: it's the wall that is in front of you at the start.

2-3. Go down the southern arm of the swastika and open the door in the bottom. In the room beyond are some officers and some barrels blocking your way to lots of dinners and ammo clips. On the left side of the alcove with the second last barrel is a couple of secrets that will allow you to pick up the goodies.

4. Open the door on the northern arm of the swastika. In the room beyond open the door to you right. Inside is a room with several alcoves occupied by guards. Firing a shot will alert all of them. In the first alcove to your left is a secret wall, hiding a chaingun. 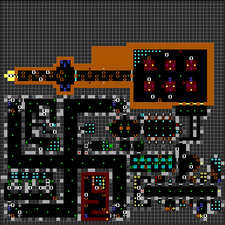 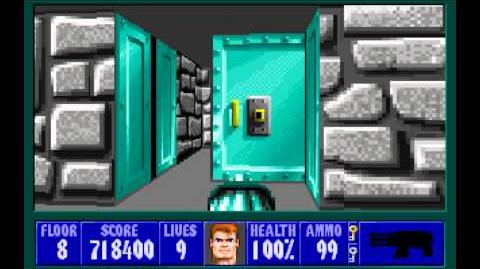