Episode 3, Floor 9 is the final floor in Wolfenstein 3D episode "Die, Fuhrer, Die!". Chronologically, it is the final level in the game. B.J must now kill Adolf Hitler himself and his remaining goons.

On any difficulty, there is the same amount of each enemy in the level. You'll start in a room filled with ammo and a Chaingun in the midsts of it. Opening up the door and—is it Hitler? No, it is a Fake Hitler, not the real one (apparent hellish occult.) On Can I Play Daddy? Fake Hitlers are no problem when it comes down to health. They are easy overall on ANY difficulty, though their health points do increase from 200 (Can I Play Daddy?) to 500 (I Am Death Incarnate!). Their only attack is to fire slow-moving fireballs from its chest. These are very easy to dodge—slow and non-hitscan. Kill the first Fake Hitler (or Hitler's Ghost / Hitler Ghost), and open the only secret of the floor on an Adolf Hitler portrait. It contains 5 First Aids and two lines of ammunition. Open up the next door(s) to reveal 2 Officers. Kill them. For 100%, go to the left and right from where the Officers were. You'll come across a Fake Hitler and an Officer on both sides protecting some ammo and some Food.

With the Gold Key, open up the Gold Door. Upon passing the wall to your left and into view of practically the entire room, the real Adolf Hitler wil be alerted. Go around the room and kill the Officers ASAP (on Bring 'Em On! and higher skills) and get into position to fight Hitler. There are about three steel block pillars in the room, so peek around the corners to fire at Hitler, then retreat back. After several rounds fired (about 65 on I Am Death Incarnate!) Hitler's mecha suit will fall off, making him as fast as an Officer and with the same firepower of Hans Grosse.

Abandon the around-the-wall tactic and just open fire on him. Sometimes he'll get stuck for a random reason, but sometimes he CAN still fire, so be wary. By now, he has about the health of 2 Fake Hitlers (on I Am Death Incarnate!), so takes about 50 odd bullets to take down on average. Soon he should die, and explodes into a pool of blood. Ain't that awesome!?

The episode ends as soon as the Führer finally falls. Before death, he cries "Eva, auf wiedersehen!". In English: "Eva, goodbye!". A Deathcam plays of his demise for your entertainment.


The absolute incarnation of evil, Adolf Hitler, lies at your feet in a pool of his own blood. His wrinkled, crimson-splattered visage still strains, a jagged-toothed rictus trying to cry out. Insane even in death. Your lips pinched in bitter victory, you kick his head off his remains and spit on his corpse.
Sieg heil. . . . huh. Sieg hell.
BUT THE ADVENTURE IS JUST BEGINNING! 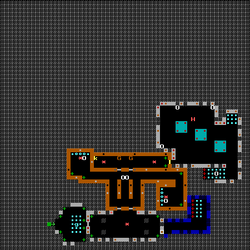 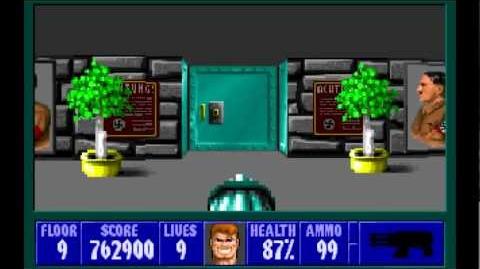