Episode 4, Floor 1 is the first level of Wolfenstein 3D episode "A Dark Secret".

The level opens in a grandiose, chandelier-lit central hall of clean stone bricks, from which a Landscape is visible but not accessible behind columns - this is where BJ has entered the weapons research facility. The hall is guarded by one to six Guards, depending on difficulty, and opens up to three rooms:

This last hallway opens in the north to a red brick region featuring several hallways, one of which holds the gold Key necessary to finish the level. In the south, a confusing room of jagged brown rock and metal centers is filled with hidden Guards, as well as two Secrets, one of which harbors a Chain Gun. Behind a locked door are two Officers and the level exit.

The level has only a few Secrets:

No enemies in this map patrol, they all are standing in place. 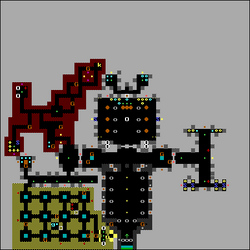 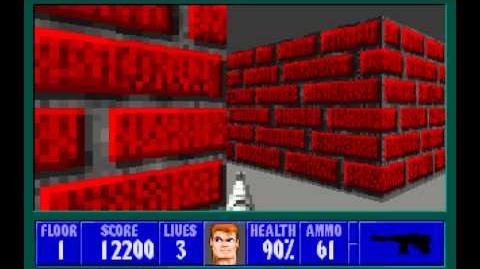