< Episode 4
Edit
watch 02:52
Roblox: DeepWoken - The Loop
Do you like this video?
Play Sound

Episode 4, Floor 10 is the Secret level for Wolfenstein 3D episode "A Dark Secret".

The level is shaped like a tremendous diamond, and dispersed throughout are are numerous Chalices and a full 75 Officers. The level is designed in such a way that a single shot fired anywhere in the level, or an Officer killed, will alarm every single Officer in the level, creating a very dangerous situation.

The walls of the level are entirely composed of jagged brown rock, but an almost-safe path exists throughout the level which is marked by individual wall tiles with blood. The implication seems to be that the developers intended the player to treat the level as a maze, and avoid conflict entirely.

The elevator at the end of the level contains a One Up.

There is only one Secret in the level.

There are three ways to get out of this level, depending on different tactics.

Strategy 1: Fight your way out[]

Fighting your way out is the only way to get all kills and Treasure. It is advised to save as soon as you enter the level, because if you lose your Chain gun and Machine gun by dying, and don't have anything to fall back on, God help you.

The only secret in the level[secret 1] is on the wall immediately to the left outside the entrance elevator. The secret is full of Ammo, but no health. It has only one entrance, though, making it the perfect spot to kill hordes of Officers. Fire one round and they will come running. Shoot them all quickly, as they are quick on the draw. Once you're confident enough that they're all dead, come out, collect the level's treasure, and leave.

The mapmakers intended for the player to be able to exit the map without engaging any enemies. To this end, there is a path through the level that steps around and behind enemies in such a way that they will not be Alarmed by the player, eventually leading straight to the exit elevator. The path is marked by blood on the walls, so follow the blood, or see the map in the next section.

Unfortunately, if you follow the path three Officers will indeed see you, and this is unavoidable. The rest of the path must be followed with haste, as these three Officers will chase you. Try to avoid them, hoping they will fail to navigate the level's many paths. Remember not to shoot, or even attack with a knife, as doing so will alarm every enemy in the level!

It seems that the mapmakers intended the level to be navigable without alarming enemies, and believe (or claim to believe) that it is so. The Apogee Software Official Wolfenstein 3D Hint Manual gives a map of the level with a marked path like that provided here, claiming the player will not be seen.[1]

To want to just leave the level is understandable - it is very difficult, even with a Chain gun, and most likely impossible if you have only a Pistol. There is an easy way to escape.

A map of this path is available in the next section. From the start, go straight. Turn left at the wall, and take the first right, and go straight. You shouldn't have alarmed any Officers by now, but you will soon enough, so sprint! Don't shoot any or you'll alarm them all. The exit elevator will be on your right. Rush in and grab your reward - a One Up. Exit the level. 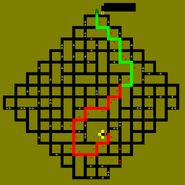 The developers' apparent intended path through the level, described in Strategy #2. 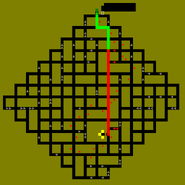 The quick and dirty path through the level, described in Strategy #3. 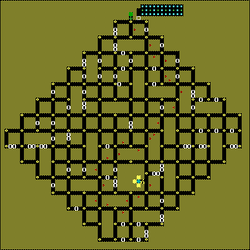 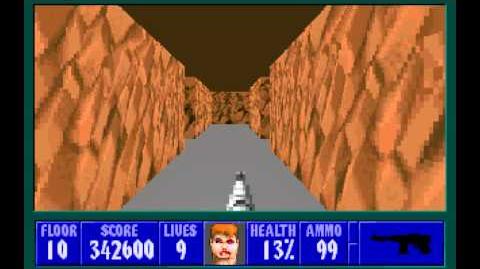