Episode 4, Floor 2 is a level of Wolfenstein 3D mission "A Dark Secret".

The level is large, almost reaching the upper limit of map size, and also very square. Outer walls of blue brick create a tremendous square hallway, through which SS, Guards, and Officers walk, patrolling for the player.

The blue brick of the outer hallway persists through much of the level, with some exceptions of red brick and wood. The end area must be accessed with a gold Key, but a door on the side provides shooting access through columns.

A notable feature of the level is an enclosed area in its eastern center, which must be accessed through a series of 11 Secrets. The enclosed area is surrounded by columns that prevent the player access, but tantalize him with visions of the contents:

To actually enter the enclosed area through the secrets is a challenge, as they are placed in such a way that pushing them in the wrong order will block the player access entirely, probably preventing him from getting 100% Treasure and Secrets ratings. Pay attention to the map below to find a way. 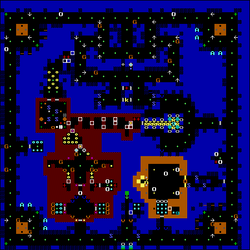 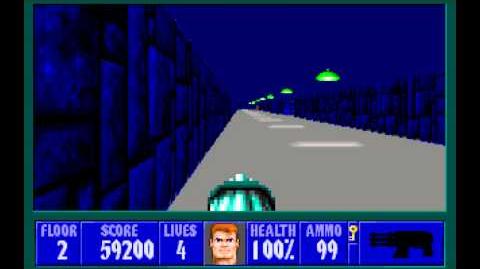