Episode 4, Floor 4 is a fourth level of Wolfenstein 3D episode "A Dark Secret". It is quite confusing because of the number of doors. To make things worse, some guards wander through these doors, making easy for them to shoot you from behind. Apart from that, this floor is not as hard as most of Episode 4 maps.

Most of the level presents brown wooden walls, except for a little maze on the eastern side of the map which has jagged brown rock walls.

This is one of the two maps (the other being Episode 2, Floor 7) which has the shortest Par time in the entire game: one minute.

At the start, you'll see a door in front of you, two on the left, and one on the right, behind which is the gold door. The first door will take you to a room with six doors, and the same goes for the two doors on your left. If you don't want to get everything, open one of the doors on the left, then, in the room beyond, the second door on your right, follow the hallway and you'll find the gold key. If you want to get 100% kills, treasure and secret, be careful of the enemies inside each room (there are a few) and of the guards that wander the map and that can easily surprise you from behind. Nevertheless, you'll find a conspicuous number of health items.

Once you've grabbed the gold key, go back to the starting room and open the door with the gold door inside. Turn left and you'll see a long hallway with LOTS of Adolf Hitler's posters (my goodness! Was it really that necessary? -Yes, it was). On the right side of this hallway are three more hallways with MORE Adolf Hitler's posters (ok, this is really awful) and some officers. On the right side of the last hallway are three more hallways with some more officers (and -guess what...- more Hitler's pictures). Once you've killed all the officers, go back to the first hallway and take the third hallway on the right side. Follow it and you'll find the exit door (be careful of the SS behind it).

1. From the start, open the door in front of you, then one of the two doors on the right. In the new room is one door: open it. Follow the first part of the hallway, then turn left, and on the left hand wall is a secret.

2. Face the alcove with the gold key, turn left, go straightforward and press on the wall.

3. From the start, open the two doors on the left, then the second door on the left side of the room with six doors. Walk down the winding hallway until you get to a door. You'll now enter the jagged brown rock maze. Follow the left hand wall unti you reach the southern side of the maze. Still follow the left hand wall: you'll discover a secret with first aids and lots of treasure

4. Not far from the third secret, still on the left hand wall is a secret revealing lots of ammunitions.

5-7 Enter the jagged brown rock maze. Follow the right hand wall until you discover another secret wall, leading nowhere. On both right and left side of the new secret hallway is a secret: both the secrets lead to treasure items.

9. This secret is interesting. It's in the room beyond the gold door, in a left corner. The wall can be pushed from two sides, but depending of which side you choose, it will lead you to two different rooms, one filled with ammo clips, the other with med kits.

10. In the same hallway of the exit door is a final secret, containing a chaingun. 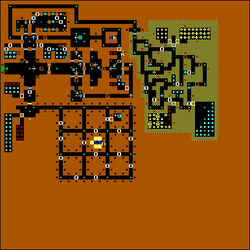 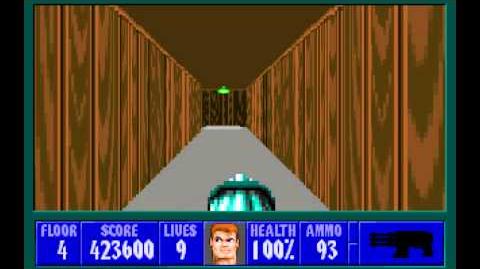