Episode 4, Floor 5 is a fifth level of Wolfenstein 3D episode "A Dark Secret".

In order to obtain the gold key, you have to discover two secrets. These secrets are mandatory, since you can't finish this level without the gold key.

One of the hallways in this map is shaped like a swastika.

In this map you'll come across four exit doors: in three of them is a barrel which blocks your way to the exit switch. At the start of the subsequent floor there are three starting doors, as well as yours, representing the three elevators that you couldn't access in the previous floor.

Behind one of the five exit doors is a room full of officers.

1. Next to the start, on the right hand wall is a secret with a machine gun inside.

2. Find the only door in your starting area. Behind it are two more doors. Open the one in front of you. You'll find some enemies: behind where they came from is a secret wall: a one up is waiting for you.

3. As you open the door on your right, kill the guards in the right hallway and the officers behind some green barrels. To grab the ammunitions from the dead officers, enter the nearby room and behind some pots and pans is a secret leading behind the green barrels.

4-5. These are two mandatory secrets. Once you have entered the room with two inaccessible exit switches, walk down the left hallway and open the door you come across. Go straightforward and press on the wall across from the door. You'll  see a chaingun and a med kit behind a green barrel. To the left of the barrel is another secret. Grab the chaingun, the med kit (if you need it) and the gold key, mandatory to finish the map.

6. In the room behind the false exit door is your final secret. If you aren't in good conditions of health or ammo, this secret is very nice: an ammo clip and three one ups are waiting for you. 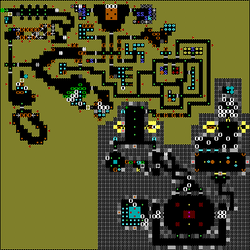 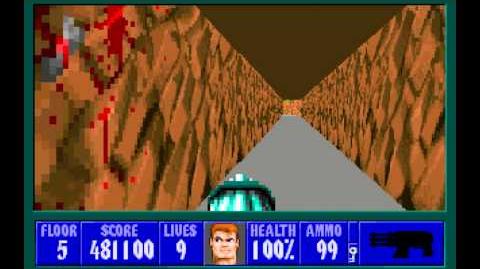