< Episode 4
Edit
watch 02:52
Roblox: DeepWoken - The Loop
Do you like this video?
Play Sound

Episode 4, Floor 6 is a sixth level of Wolfenstein 3D episode "A Dark Secret".

From the start, kill the guards in the very long hallway on your left. Both the paths of the hallway will lead you to small rooms that you don't have to explore in order to finish the map (they only contain guards, ammo clips and some treasure items). Beyond these rooms is a another long hallway with LOTS of little extensions. There are 29 extensions in total, but "only" on 18 of them are doors, and (thank goodness!) only two of them are mandatory to finish the level: starting from the north, the 11th, which houses the gold key, and the 23rd, with the gold door behind another door. When you open it, kill a dangerous line of officers and open the only door you come across. Kill the enemies  and open the gold door. If you don't want to explore all the rooms, open the doors you'll find in each room in this order: left, right, right, left. At this spot you'll be in front of two gold doors, both leading to the silver key. Manage your way back to the silver door (it's in the same room where is the first gold door). It leads to three doors. Open one of them and be prepared to a final big trap of officers.

1. When you start, take the right path of the long hallway and open the second door you come across. Inside is a room with guards, crowns and two more doors. On the left of one of them is your first secret. Lots of ammo clips are your reward for finding this secret.

2. Your final secret is on the left of the silver key: this secret hides a wide set of treasure items (including a one up).

There are three starting doors other than yours. This is because in the previous floor there were three exit switches that you couldn't access because of barrels. 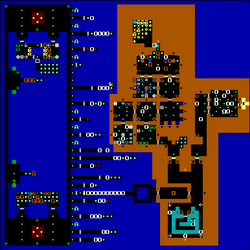 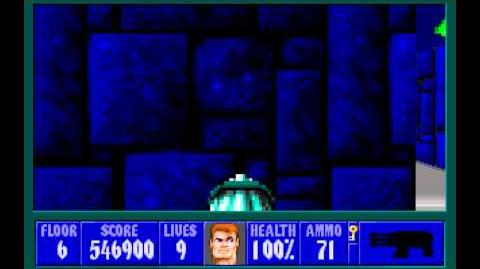