Episode 4, Floor 7 is a seventh level of Wolfenstein 3D episode "A Dark Secret". Both keys are present and you must pass through one locked door of each kind to get to the end, but you do not actually need either key as enemies on the other sides of the doors will hear you. Also like some other levels in the episode the actual level is large, but can be finished quickly.

If you fail to jam the locked gold door you face at the start, you have to take a very careful detour, because you can find yourself trapped forever if you make a specific mistake. Namely to get the gold key you must start by going through the door to the left of the starting position. When you find a junction take the left and look for a secret wall on the eagle portrait, but DO NOT push the next eagle portrait. If you do you will never be able to get the gold key, and may be trapped permanently, if you didn't jam the door at the start. Instead look for another secret to the left. Then look for another secret in the hall beyond that, right of the treasure item. You will now find two doors both of which lead to the room with the gold key. If you are going for 100% secrets, you can push the other eagle portrait AFTER you have picked up the gold key, on your way back.

There are five secrets in this floor and you should follow the order in case of Secret no.1 to no.4 if you want to get 100% Kills and the gold key officially.

2) Push the plain red brick in the Secret no.1 to get a Crown.

3) Push the plain red brick near the crown in the Secret no.2 and open the door to kill the hidden officers and get the gold key.

4) Push the red brick with eagle portrait in the Secret no.1 if you just want to achieve 100% Secrets.

5) After getting into the gray zone, you will face the 4 doors. Enter the first door from the left and open the silver door (You need to get the silver key in somewhere else in the gray zone). Push the plain gray stone brick on the left side of the room with 3 wood islands, officers and 1-Up to get two Crowns and four First Aid kits. 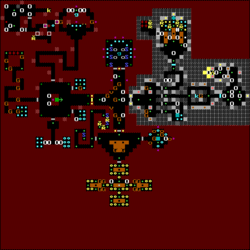 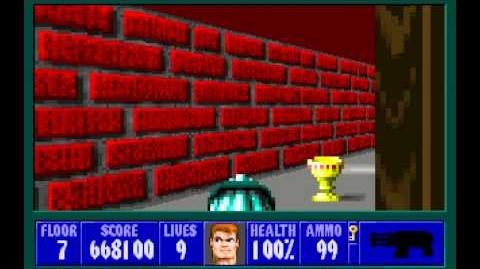