Episode 4, Floor 8 is the eighth level of Wolfenstein 3D episode "A Dark Secret". It is notable for having the highest count of enemies in the game. It is also one of the few levels in the game which has green slime walls but not mutants.

The level opens with a trap: you start in front of a row of ammo clips, but while grabbing them you'll be seen by officers behind you.

The officers come from two paths: facing your starting door, take the right path and open the door at the bottom. The area beyond is full of guards that will all come for you at your first shot. In this area go straightforward and you'll find the gold key.

Take the other path at the start and open the other door. This leads into a room with some officers behind some wooden walls: handle this trap as best as you can, then, when you come across two doors, open the one in front of you. As soon as you fire a shoot in the new room, many enemies will be alerted and they will come for you through three different corridors. Kill them, go straightforward and open the gold door. Cross two small empty rooms and open the next door.

You'll now enter a row of little red brick rooms with some guards and three silver doors. You don't need to open any of these doors, they just contain a few enemies and treasure items. Traverse the row of red rooms until you come to a door which leads into an empty jagged brown rock area. At the bottom of the room are two doors that will take you to the same area. In this area, be careful of the hallways that contain officers, then follow the right hand wall and open the first door you come to.

This leads into a blue maze with officers. Find a door in the center of the maze. It is critical, because inside it is the silver key.

Instead of opening the three silver doors in the red area (as said before, it's not mandatory, unless you want to get 100% of everything), find a silver door in the jagged brown rock area (in front of it is a regular door which will take you to an area with several guards) and open it. Kill the officers in the room beyond and the SS inside the large exit room, then you've done.

1. Face the first gold door you come across in the mission, turn left and press on the wall. Behind it is another gold door which leads into a room full of guards and chalices.

2. Face the gold door again, but this time the secret is to its right. Behind this one is a gold door too, and this one leads into the blue area. This secret is a short cut that speedrunners can use to finish the map quickly. 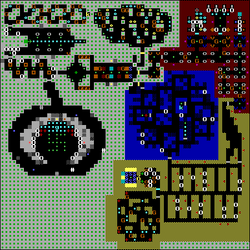 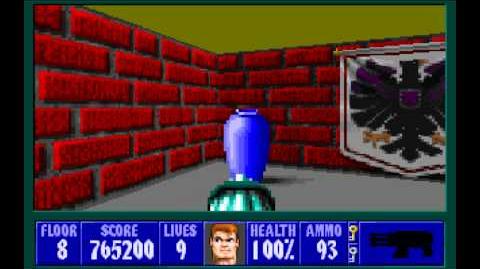